This superb betel box is of tortoiseshell panels and solid gold mounts (the four spherical feet are of gilded silver). The gold mounts retain remnants of red staining (often achieved in Southeast Asia through the application of a tamarind juice solution), which was applied to enhance the colour of the gold.

The top cover is hinged and decorated with a central gold plaque modelled on the Dutch coat of arms over a leafy laurel flourish. The four corners are decorated with gold panels that feature stylised Chinese bat motifs, suggesting that the work was undertaken by a local peranakan Chinese goldsmith, possibly working for colonial Dutch clients or perhaps a local wealthy peranakan Chinese client. (The peranakan are the Indonesian equivalent of the baba and nonya Chinese of the Straits Settlements – Chinese who have been present in Southeast Asia for several generations and who became acculturated with local indigenous ways, such as chewing betel.) Additional gold floral plaques hide rivet heads and other elements used to construct the box.

The interior of the box is fitted with a white metal lock, and two elaborate gold floral-form hinge struts. The interior also has impressions in the tortoise-shell sides where internal dividers would have been fitted to hold the small boxes and other utensils that would have contained the various elements of the betel quid.

The use of a coat of arms on the lid modelled on the Dutch coat or arms might have been intended to actually portray the Dutch arms, or to suggest the owner’s aristocratic pedigree (real or imagined!)

The adoption and amendment of the Dutch coat of arms was widespread in the Dutch East Indies. The Dutch crown motif was incorporated into carved ivory Kris handles in Madura and in stone as parts of temples in Bali, for example. Also, well-to-do colonial Dutch merchants had the doors of their coaches and carriages emblazoned with coats of arms to suggest an aristocratic lineage. This European practice was also adopted by local indigenous rulers. A contemporary painting in Amsterdam’s Rijksmuseum and illustrated in Zandvlieyt (2002, p. 309) painted around 1870 shows the carriage of Mangku Nagoro IV, a central Javanese ruler. Emblazoned on the door is the Dutch coat of arms adopted as his own but with the letters ‘IV’ being placed at the centre.

Heringa (1996, p. 114) illustrates a batik dated to circa 1880 which is decorated with a stylised version of the Dutch arms along with an acanthus or laurel wreath in precisely the manner as illustrated on the top of the box here. The batik combines peranakan and European elements. Write the authors, ‘The fanciful coat of arms evokes the crests found in the four corners of Indian export textiles and on the carriage doors of Batavia’s wealthy citizens. Many Europeans, the black sheep of aristocratic families as well as those of lowly birth, passed themselves off as aristocratic scions once they had made good.’

The Javanese habit of chewing betel was adopted by the local Dutch and expatriate Chinese and exquisite boxes to hold the nut, the betel leaf and the other accompaniments were commissioned by them. The Dutch and the Chinese realised early on how important betel was to the indigenous people and how it was an essential part of hospitality including with the indigenous rulers. They quickly incorporated betel use with their dealings with local elites. Paintings that show the wives of Dutchmen at the time often show betel boxes prominently displayed. One such 17th century painting by J.J. Coeman which today hangs in the Rijksmuseum shows Batavia’s Cornelia van Nieuwenroode with her husband Pieter Cnoll and two of their nine daughters, one of who is shown holding a jewelled betel box (Gelman Taylor, 2009, p. 42).

The fashion for luxurious betel accouterments and other finery among the Dutch saw the governor-general in Batavia Jacob Mossel issue a decree in 1754 stating that only the wives and widows of the governor-general, the director-general, members of the Council of the Indies and president of the Justice Council were permitted to use gold or silver betel boxes adorned with precious stones, (Zandvlieyt, 2002, p. 206). This was deemed necessary on account of VOC Company wives who had become ever more competitive when it came to ostentatious displays of betel boxes, thereby wasting their husbands’ hard-won earnings.

The box here is in very fine condition. There are no obvious losses to the gold mounts. The gold is likely to be around 18 carat. The tortoiseshell remains bright. There are no structural issues. Overall, it is a particularly fine and rare example. 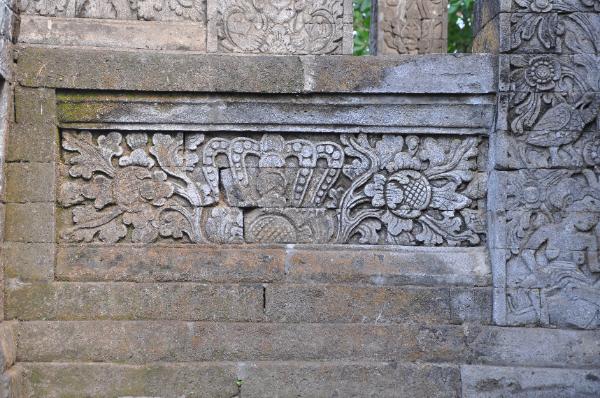 Dutch crown motif incorporated into the stonework of a temple in northern Bali.

Heringa, R. et al, Fabric of Enchantment: Batik from the North Coast of Java: From the Inger McCabe Collection at the Los Angeles County Museum of Art, Weatherhill Inc, 1996.