This very fine necklace is from Yemen, from the Khawlan Sanaa region, a tribal area in the northeast of Sanaa province.  It is an unusually large and showy example.

Such necklaces usually were reserved for wear at weddings and other important life festivities,. Brides often were presented with such necklaces which they subsequently regarded as among their most important jewellery.

The main silver elements have remnants of gilding (gold plating). One of the subsidiary tear-shaped pendant plaques is larger than the rest but it is in the same style and seems to be original.

The colour of the coral was felt to symbolise youth and beauty. Corals were also believed to staunch bleeding. Such necklaces were worn by local Bedouin and by local Yemenite Jewish women.

The necklace is stable.  There are only minor losses here and there, which are to be expected given the age of the necklace and that it has been worn. The necklace is suspended from its original cotton plaited stringing. An additional chain could be added to make the necklace more wearable today. 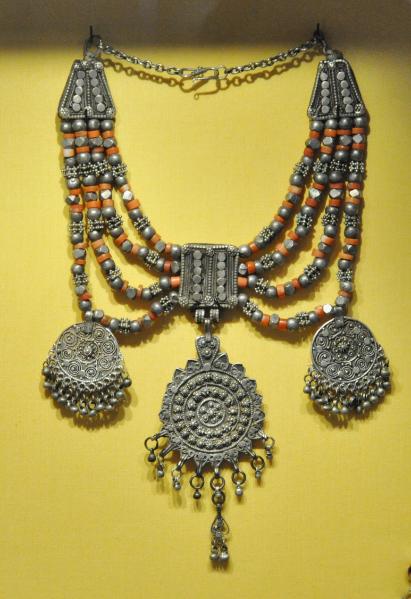 above: A related but less complex Yemeni necklace on display in the Islamic Art Museum of Malaysia. (Photographed February 2017).