Each of this pair of large, hollow silver anklets is beautifully decorated with chasing and applique work and are among the finest examples of this style of anklet that we have encountered.

They are likely to have their origin in Zanzibar on the the Swahili Coast of East Africa. They are similar to examples that were worn in Oman, and are believed to be based on similar examples worn in Western India. The Zanzibar origin is suggested by their provenance (they were accompanied by a pair of silver-clad shoes that almost certainly are from Zanzibar) and the designs on the faces of each anklet is of a scrolling tree-of-life motif which emerges from a pot or vase, rather than a more staid, restrained scheme based on abstract geometric motifs which would be more typical of what would be seen on similar Omani anklets.

Certainly such examples are known to have been collected in Zanzibar (see Ginzberg, 2000, p. 220).

The sides of the anklets are similarly decorated with leafy scrolling and borders of flowers.

The anklets are hinged and open when a central silver bolt is removed.

The tree-of-life motif is often encountered in Zanzibar woodcarving, particularly in and around the elaborate wooden doors to important houses in the island’s capital Stone Town, and in other nearby towns.

Zanzibar was at first ruled as an effective colony of the sultans of Oman but as the island became wealthier because of the trade in ivory, gold, spices, timber and slaves, the Omani court relocated to this new commercial centre of dominions. Over time, Oman grew relatively impoverished and an administrative after-thought whilst Zanzibar continued to prosper. In a sense, Oman almost was ruled as a colony of Zanzibar. This shift in commercial and political power was reflected in the jewellery and other arts. The jewellery of the Arab population of Zanzibar was essentially Omani but with some local twists. It is likely that silver and goldsmiths operated in Zanzibar – it would have been surprising if this was not the case given the growing wealth of its commercial trading elite and the fact that the Oman court had relocated there. These smiths seemed to have made jewellery in the Omani tradition but with some local augmentation, or modified jewellery that had been produced in Oman, to suit local tastes. The island’s ethnic make-up was diverse and so other influences are likely to have made their impact on local material culture including jewellery design. Quite apart from expatriate Omanis and other Arabs who resided in Zanzibar, there were the local Swahili Africans, but also a rich mix of other trading groups such as Parsis, Indian Khojas and Bhoras, Hindu Indians, Christian Goans and Ceylonese.

The pair of anklets here are in excellent condition. 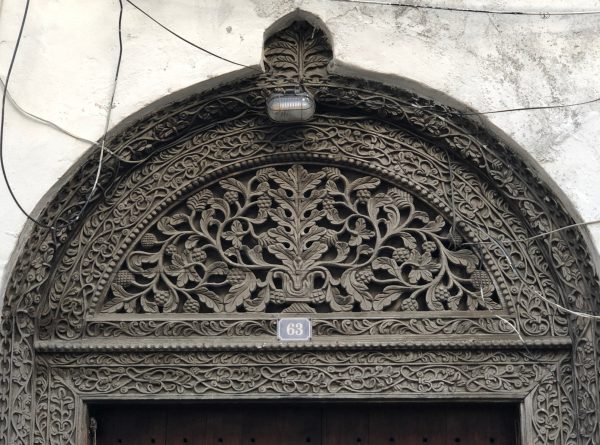 Above: A wooden lintel above a door in Stone Town, Zanzibar. It is carved with an elaborate, scrolling tree-of-life motif that is reminiscent of the motifs on the faces of the anklets.

Dale, G., The Peoples of Zanzibar: Their Customs and Religious Beliefs, The Universities’ Mission to Central Africa, 1920.