This plaque of many small table cut diamonds set in gold reads ‘Prime minister of Iran Mirza Ali Asghar Khan Amin al-Soltan 1318 (1900-1 AD)’. Probably the plaque was intended to be sewn onto fabric – perhaps a headdress such as an astrakhan, and worn. (It could be converted to a brooch with the addition of a pin to the reverse.) Most probably it was a gift given by Mirza Ali Asghar Khan Amin al-Soltan himself.

Mirza Ali Asghar Khan (1858-1907), to whose name the honorific title of ‘Amin al-Soltan’ was also added  was the last prime minister of Persia under Naser al-Din Shah Qajar, the Qajar ruler of shah of Persia. The son of an influential court minister of Georgian origin, he was appointed to several high positions including treasurer of the army and justice minister prior to being made prime minister. The appointment confirmed the power that Mirza Ali already had – for some time he had been the most powerful minister in the government. He was assassinated on the steps of the Iranian Parliament on 31 August 1907.

Such a plaque is similar to diamond-set tugras (the emblems of the Ottoman sultans) that were presented in Ottoman Turkey.

Above: A diamond set gold tugra (emblem of the Ottoman sultan) on display in the museum of the Institut du Monde Arabe (Institute of the Arab World) in Paris. 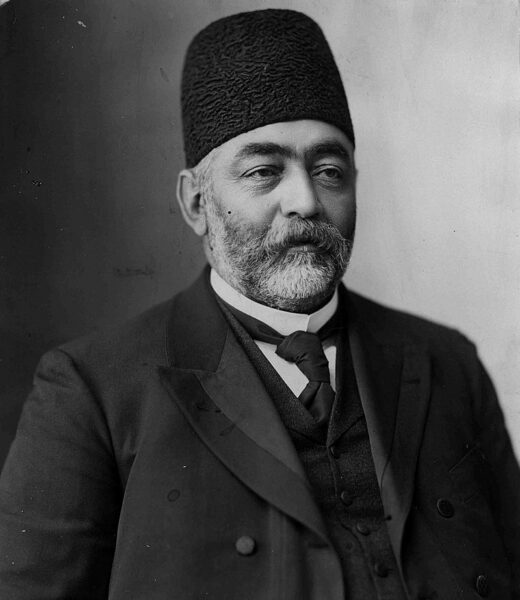 SCROLL DOWN FOR MORE IMAGES