This large scroll of more than 36 metres (or 120 feet) in length comprises approximately 25 separate scenes based on the Buddhist Vessantara Jataka – the story of Prince Vessantara, the previous incarnation of the Buddha. It is hand painted and on white cotton. Such scrolls were (and still are) used in Northeast Thailand (Isan) and Laos, and are most particularly associated with ethnic Lao people living in Thailand’s Northeast. The scrolls are used to tell the narrative of the past lives of the Buddha and on account of their massive length, usually were hung outdoors around temple and monastery compounds. Few survive because of their use outdoors in Thailand’s tropical climate, and most of those that have are in relatively poor condition. Others still might survive but have been cut into fragments for commercial purposes.

Relatively few such scrolls are believed to be outside Thailand. Lefferts & Cate (2012, p. 7) identify those that are in museums: three scrolls are held by the Walters Art Museum in Baltimore, one is in the Asian Art Museum in San Francisco, one is in Denmark’s Moesgard Museum, one (which is 31 metres long) in Singapore’s Asian Civilisations Museum, and there is a fragment of a scroll in the British Museum (see

In Thailand, there is one scroll in the Ubon Ratchathani Museum, and one in the Anthropology Museum of the Suranaree University of Technology. Other scrolls no longer in use are in wats and monasteries.

The example here seeks to contemporise the story of Prince Vessantara by mixing traditional settings and costume with (then) contemporary buildings and dress. And so, scenes incorporate traditional Thai religious architecture along with buildings in concrete and which show art deco influence for example.

The scroll dates to around 1943 judging from the style of dress pictured – a combination of traditional Thai dress but also Thais wearing Western-style dress including ladies with western dresses below the knee, blouses, platform shoes and handbags. May wear Western-style hats too. This also is helpful in dating the scroll.

A military coup ended Thailand’s absolute monarchy in 1932. And in 1938, Field Marshall Phibun Songkhram emerged as the new prime minister. A moderniser, with dictatorial tendencies, he issued a series of edicts aimed at further modernising everyday Thai society. In January 1941, Phibun’s administration issued a new edict that proscribed appropriate dress to be worn by all Thais. The wearing of Western dress and accessories was soon made mandatory, including hats. Thai soldiers in uniforms that seem to have a 1940s cut also appear towards the end of the scroll.

laa or 90 centimetres – the width of the cloth here. Along its length, it comprises several pieces of cloth sewn together, and there are some old repairs.

The scroll includes numerous captions in Thai script – but probably in a Lao dialect.

The condition of the scroll is good. Small sections have been cut from the top here and there, possibly to allow the scroll to be hung more readily from temple eaves. And there is some fading as can be expected (although it is brighter in reality than suggested by the photographs below). Both ends of the scroll suggest that it has been shortened but given the large length as it stands, the scroll is most probably relatively complete. Overall, its condition is at least as good as other known examples in Western collections. It is also earlier than some others. For example, it pre-dates that in the Asian Civilisation Museum by around two decades. 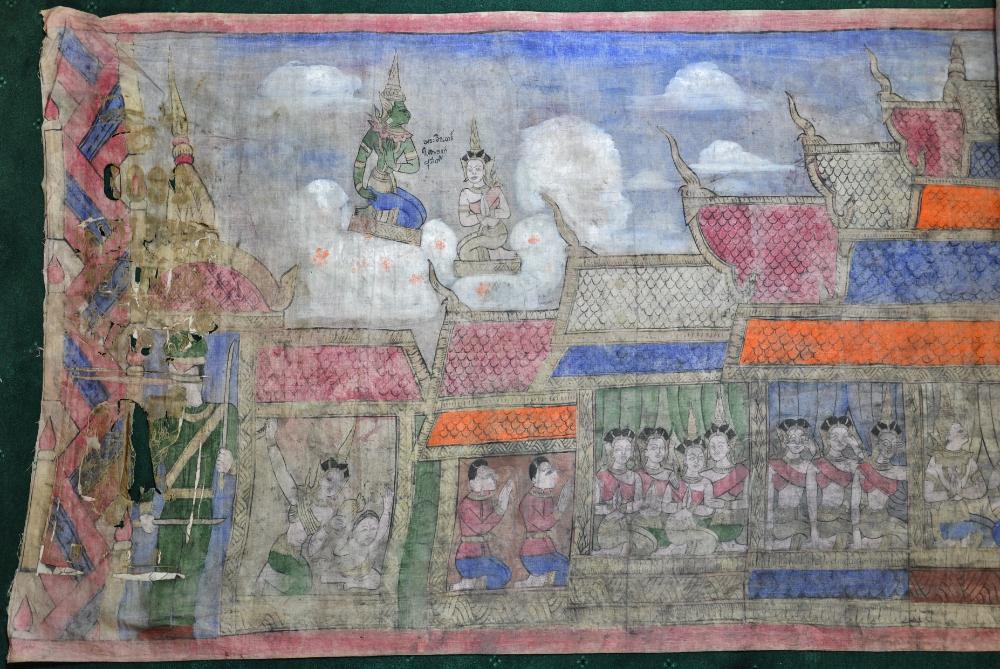 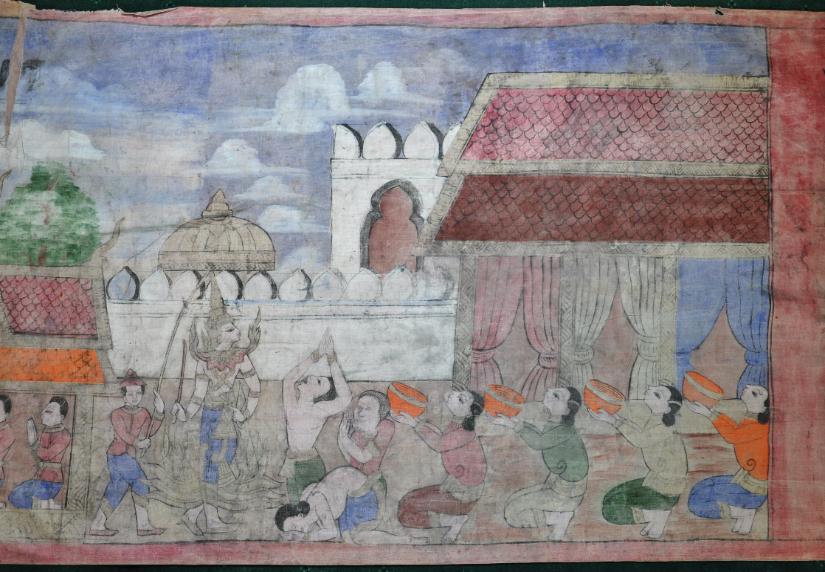 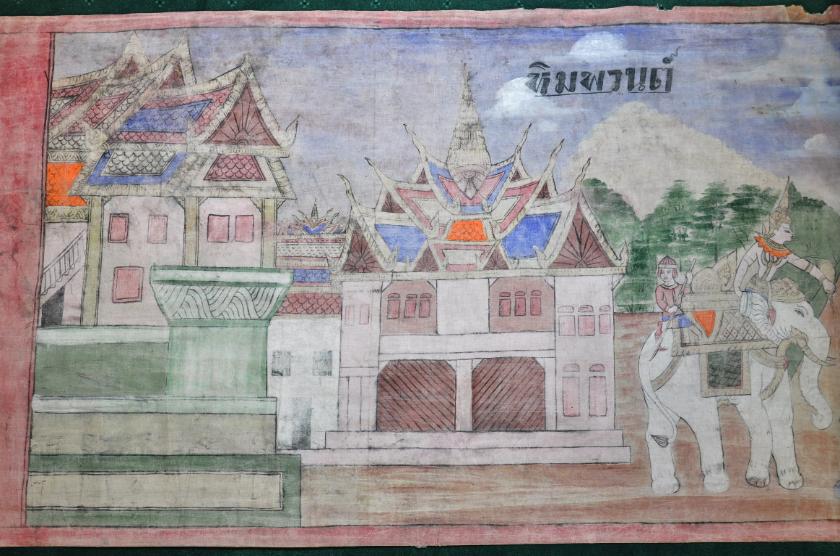 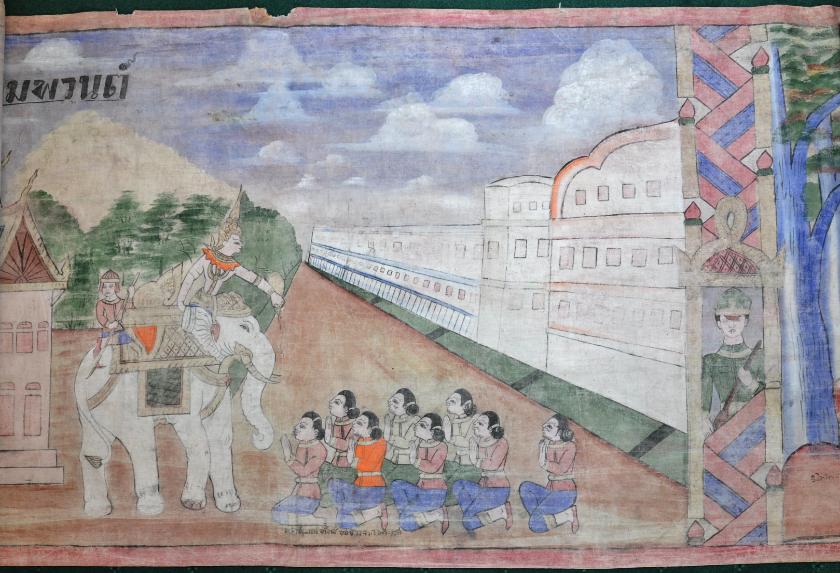 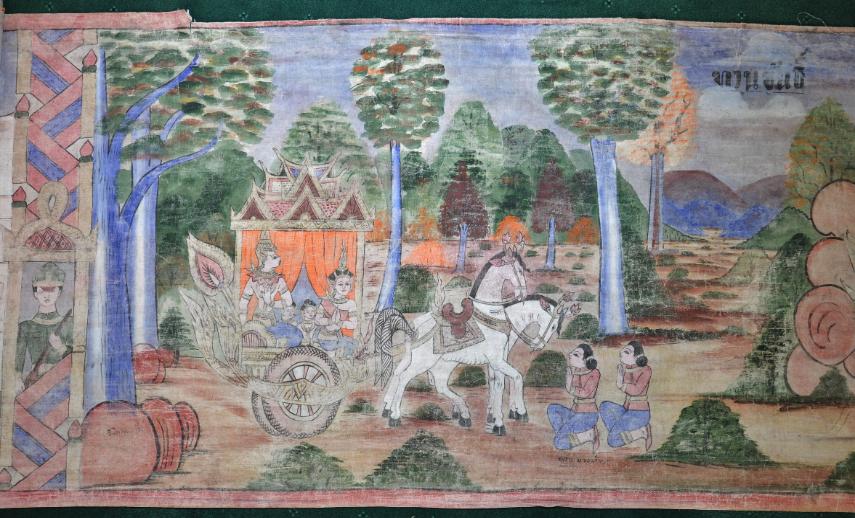 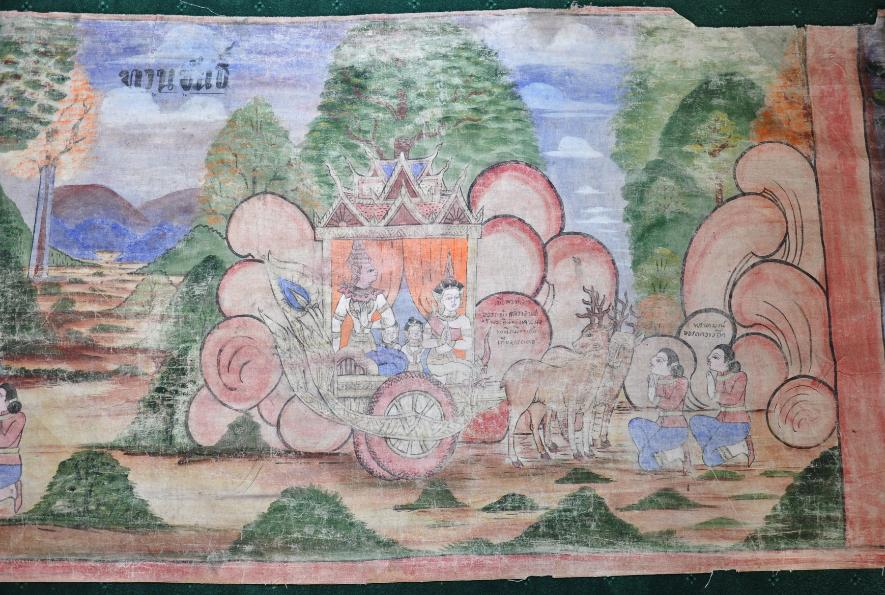 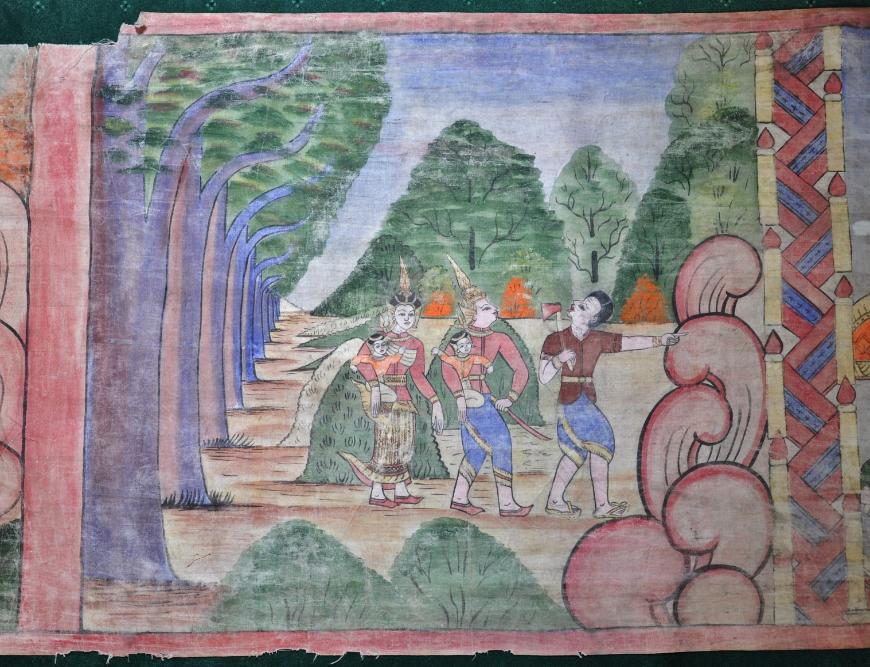 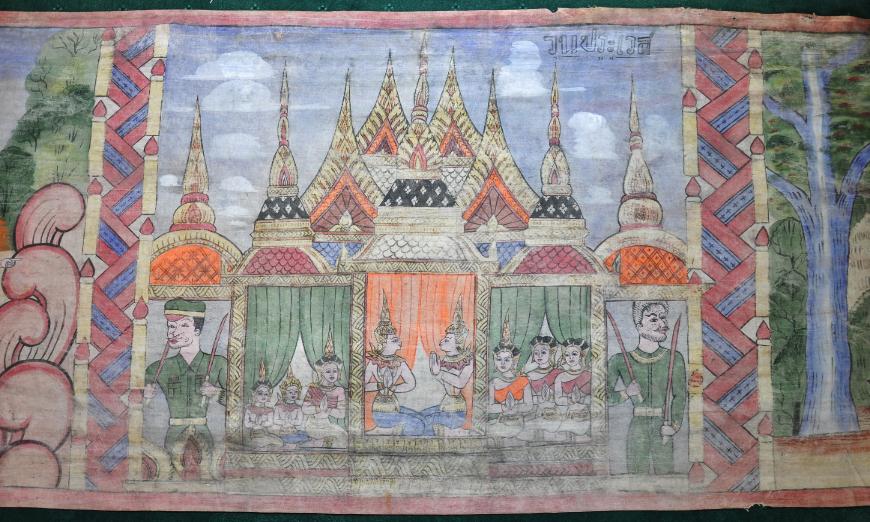 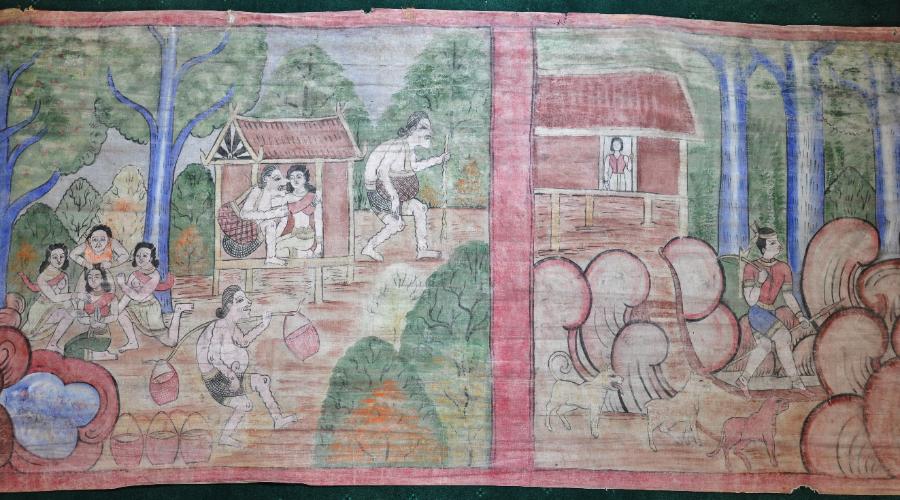 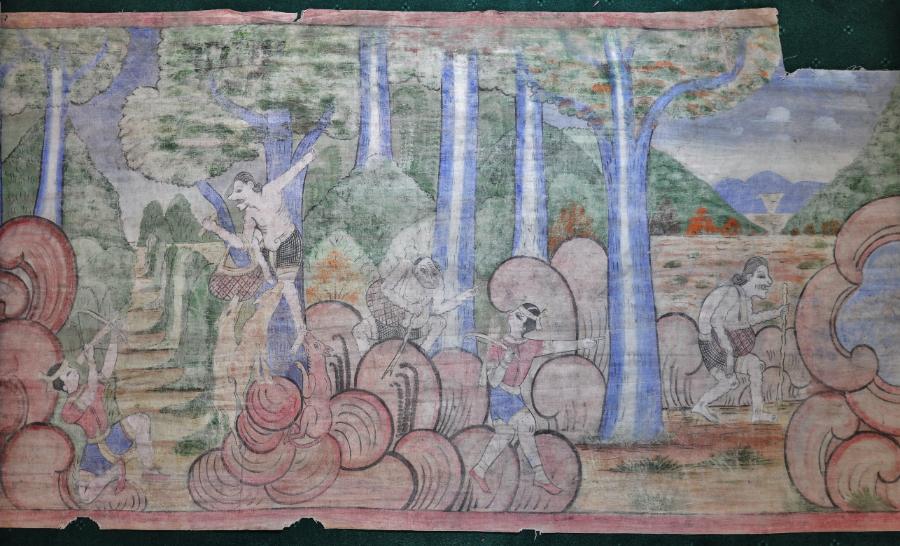 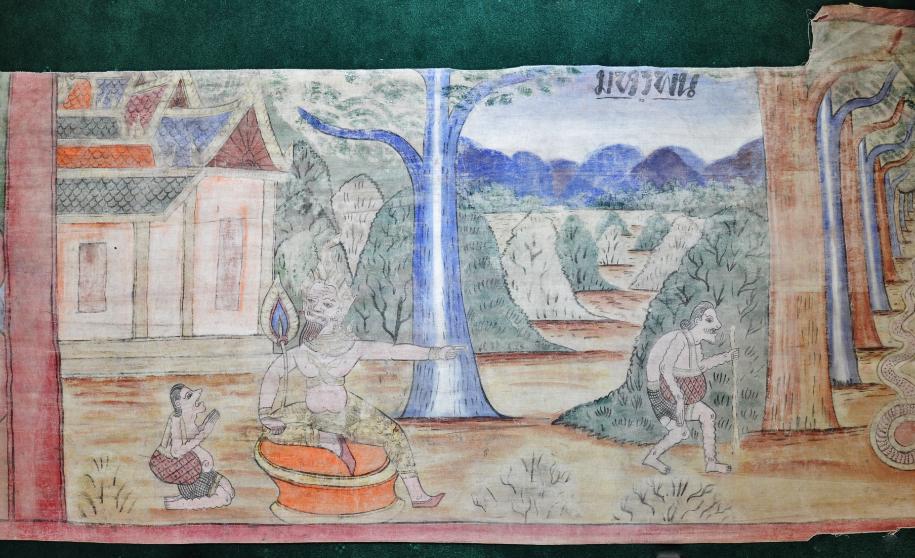 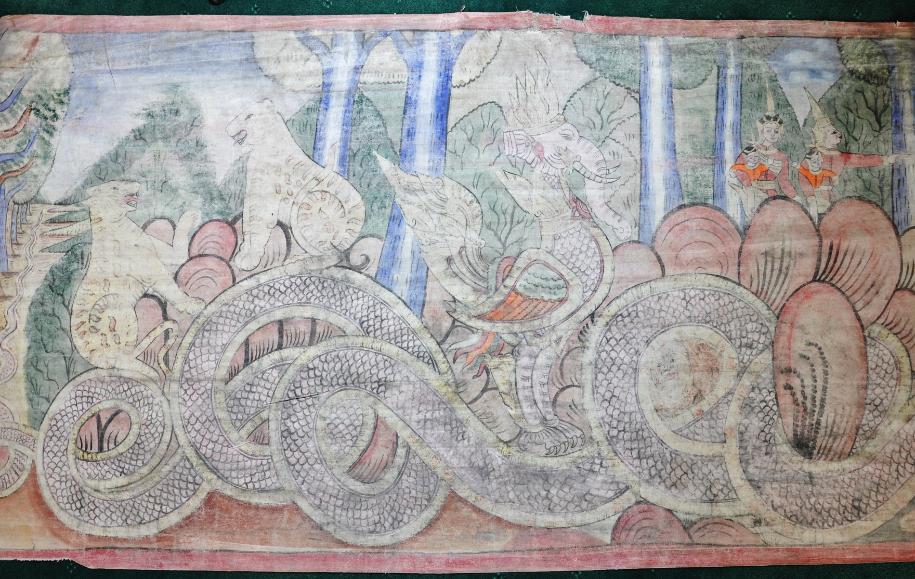 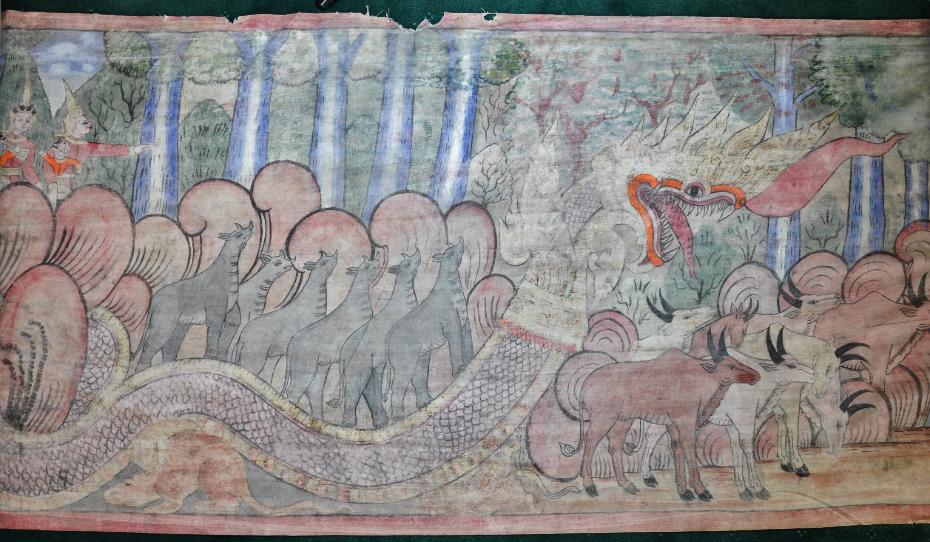 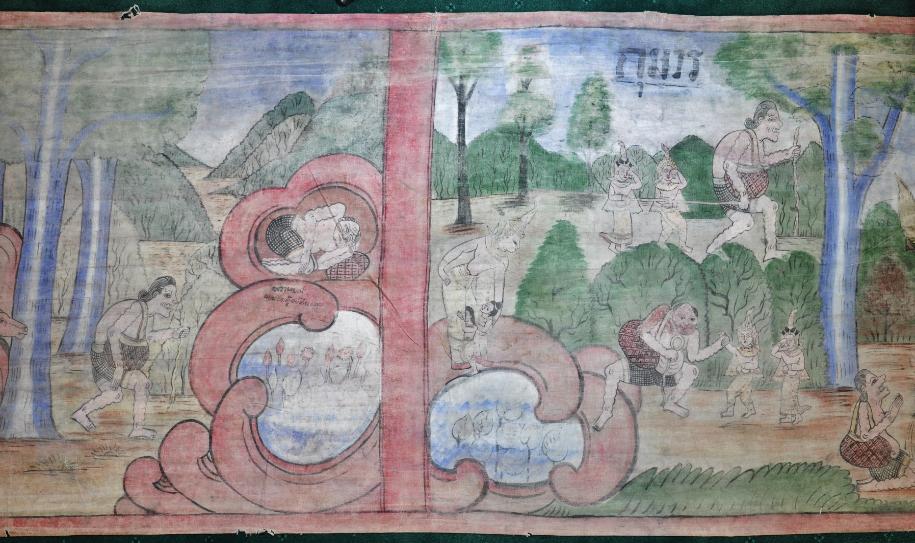 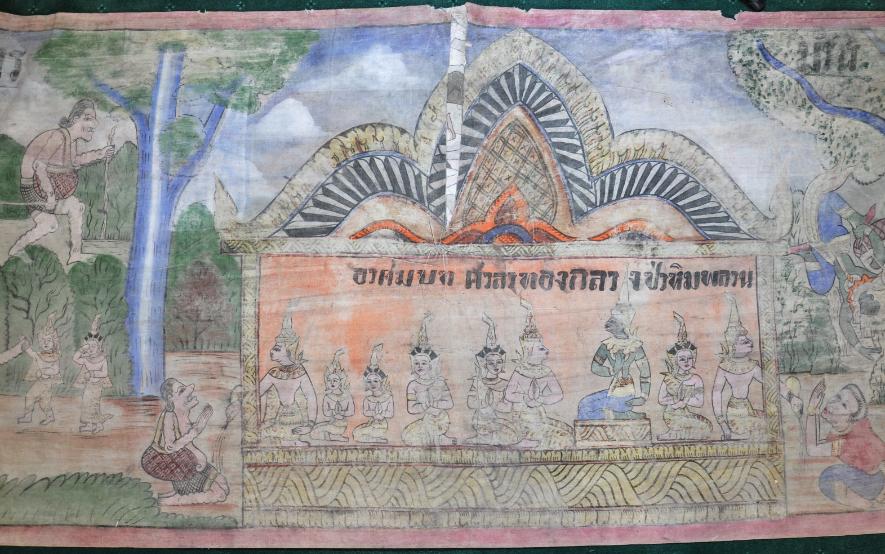 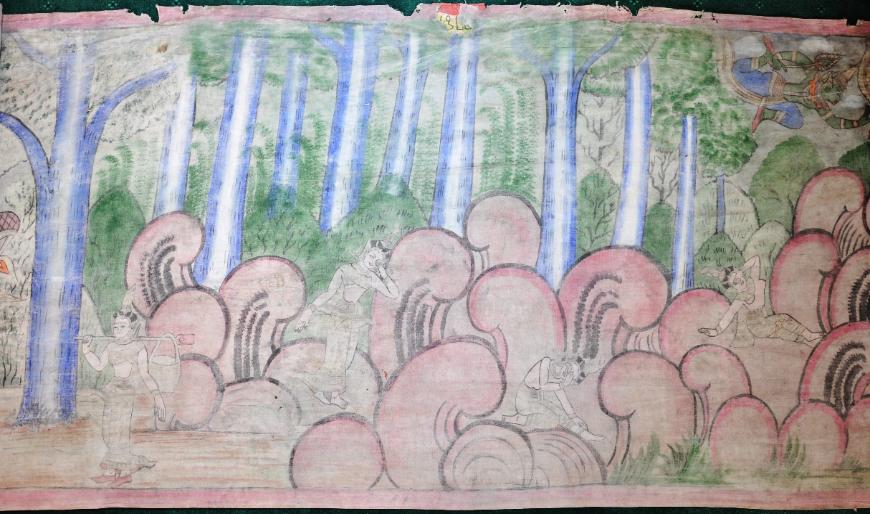 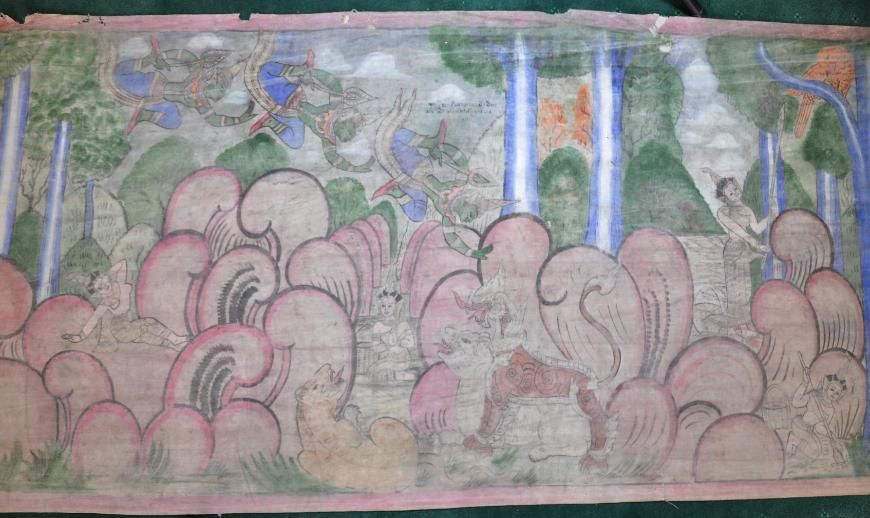 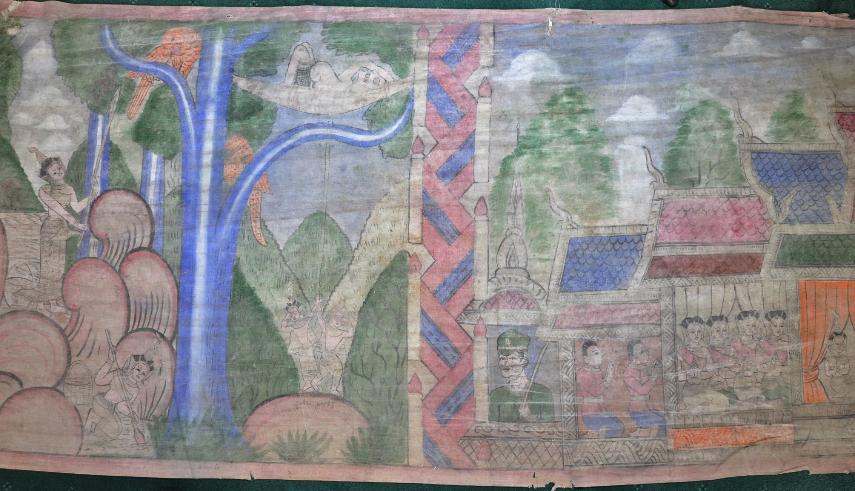 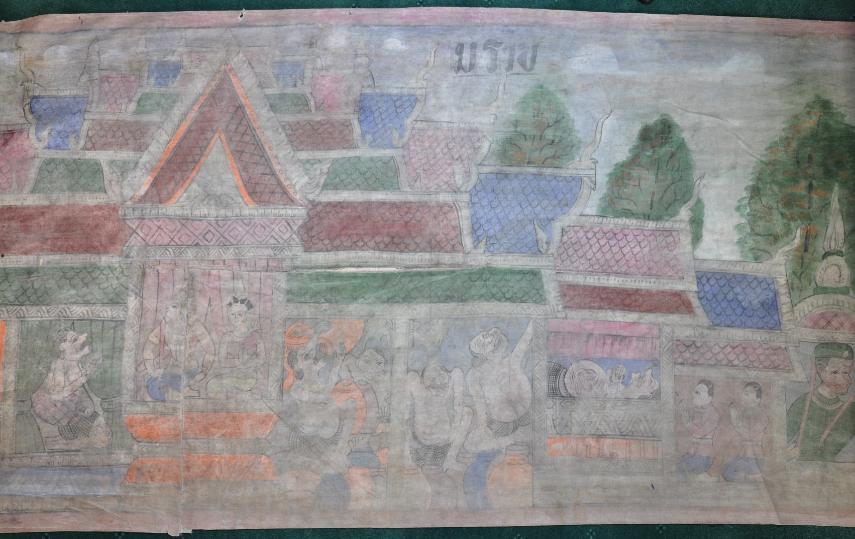 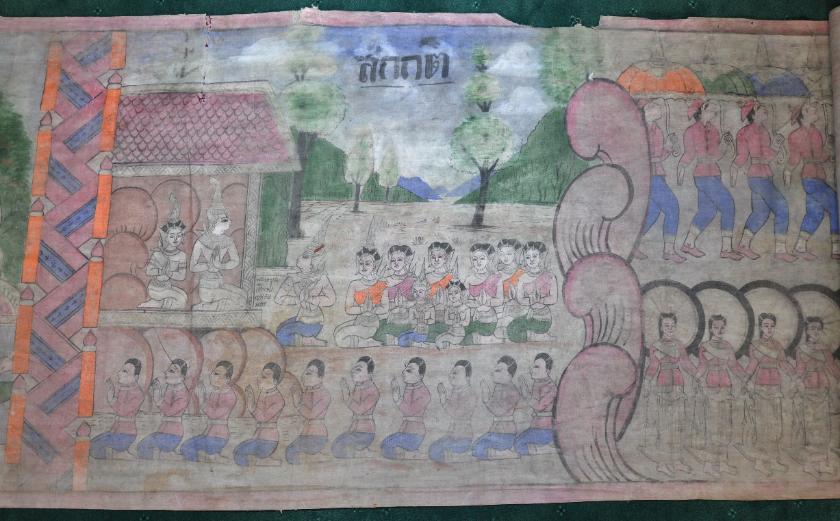 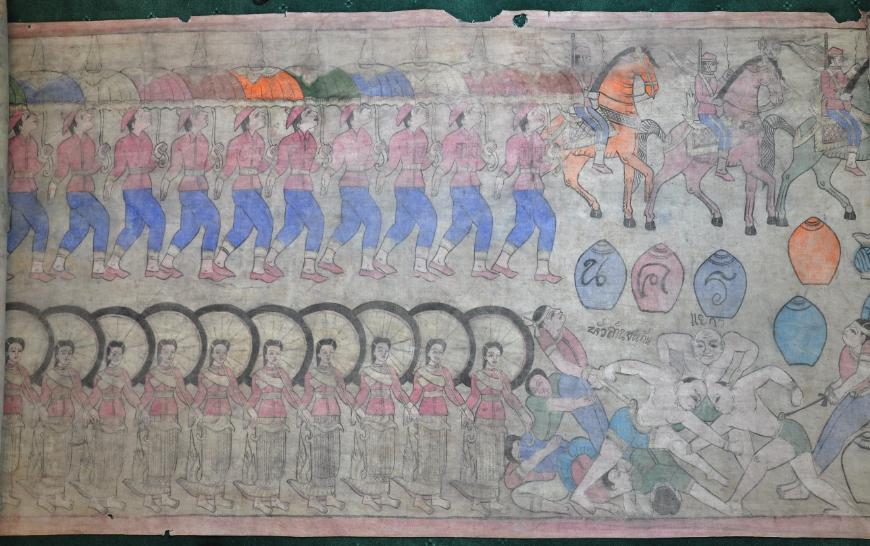 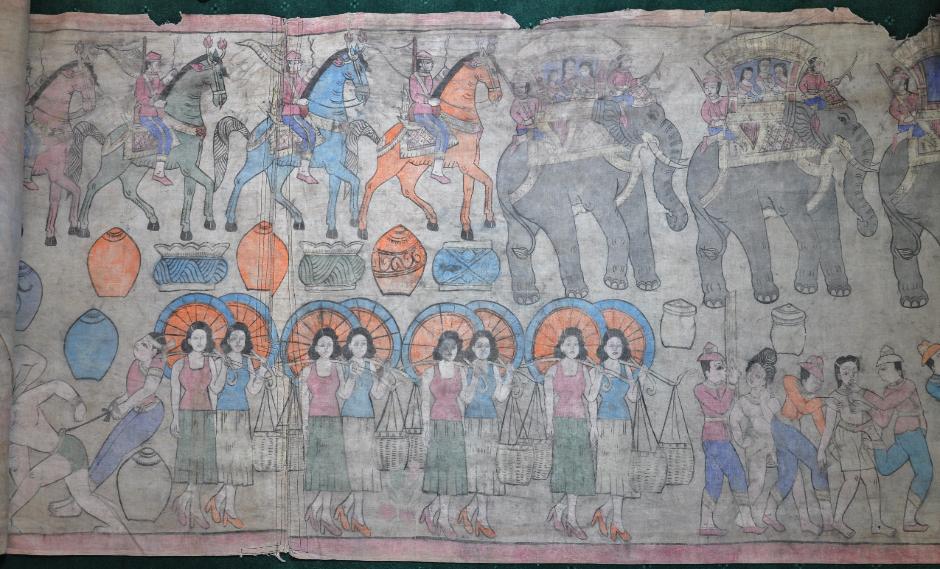 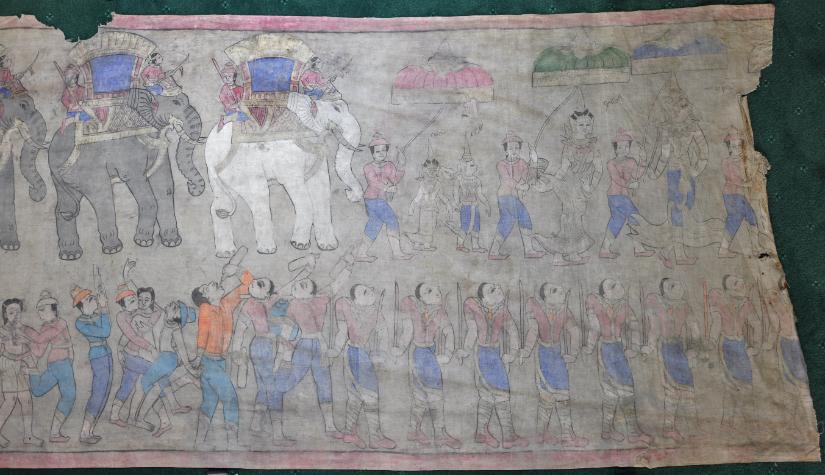