This gilded and red and black lacquered kammavaca manuscript set comprises two wooden covers with shwe zawa work on the outer face and (unusually) the reverse, sixteen leaves, and an embroidered binding ribbon.

The leaves of this example have been fabricated from saffron-coloured textile – most probably the old robes of a venerated monk as was the practice – and then lacquered and cut into shape.

Kammavaca leaves can also be made from lacquered palm leaf, ivory, copper and brass sheets. The covers (both sides) and the outer faces of the introductory leaves are decorated with kinnara and other celestial beings within panels amid complex foliate scrolling borders.

magyi zi lacquer made from tamarind seed, between hatched (yazamat) borders. Each leaf is numbered in Burmese script.Kammavaca manuscripts were presented to novice monks and typically contained the rules and instructions of the monastery. Commissioning and presenting such manuscripts earned the laity merit and often were presented to mark important life cycle events such as an important birthday, marriage or birth.

kammavaca. It has been woven with a prayer called a sarsekyo – the text is in white against a red background. Few of these have survived. They were woven by professional sarsekyo ribbon weavers and also by ladies of rank as an act of devotion. The text of this ribbon exhorts the devotee to give respect to the Buddha, to the Buddhist scriptures and to the Sangha (Burmese monkhood).

from a UK private collection 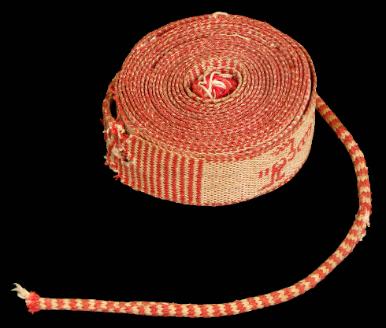 The outside of one of the two wooden covers

The inside of one of the wooden covers

One of the two introductory leaves or pages