This fine geringsing cloth is part of a group of the most interesting geringsing cloths from Bali – those that include mirror-like arranged groups of human figures arranged around a central star motif. The figures here are shown with the bodies in three-quarter frontal position with their heads in profile, similar to the wayang kulit shadow puppets. Approximately 22 male and female seated figures are shown on this textile which has been made from stitching two lengths together.  Such geringsing wayang kebo cloths were considered especially magical and powerful, and were worn as festive shoulder, breast or waist cloths. They were a status symbol, among geringsing cloths.

Geringsing cloth is the much fabled cloth from one particular village in Bali – the village of Tenganan Pegeringsingan in north-east Bali, which is noteworthy not only for this rare cloth but for its unusual customs which set it apart from other Balinese villages and communities. Geringing is regarded as a sacred cloth, not just in Tenganan, but across Bali, and was widely ascribed supernatural properties, particularly in assisting with healing and even with exorcism (Guy, 2009, p. 96). The wearing of geringsing cloth both implied the wearer’s ritual purity and helped to preserve it.

The production of geringsing – much of it based on patola as is the case with the cloth here – became a speciality of the villages of Tenganan Pegeringsingan.

The villagers of Tenganan are known as Bali Aga, or ‘original Bali’. They worship the god Indra who they honour as the creator of the first human beings and as the divine originator of their spectacular geringsing cloths. They consider themselves to be quite separate to conventional Balinese, as indeed do other Balinese. Their culture appears to be a form of pre-Majapahit Balinese culture. It is insular: the village is small and walled. Traditionally, villagers must marry within the village; those who did not were forced to live outside its walls.

Geringsing is a double-ikat cloth, meaning that it is a highly complex and laborious textile to produce, hence its expense even when bought new. It requires the resist dyeing of both the warp and the weft threads in such a way that when combined in plainweave they both contribute to the desired pattern.

The villagers view the ability to weave geringsing as instrumental to their identification as members of the community. Traditionally, different patterns were worn for different important ceremonies. The ceremonial nature of the cloth means that women are forbidden to be involved in its manufacture while menstruating.

Bolts of geringsing cloth are never wide  – it is woven on narrow backstrap looms. It is made from homespun cotton and the traditional rust hues of the cloth are derived from vegetable dyes, including a red dye from the roots of the noni tree (morinda citrifolia). Before dyeing the threads are soaked in a candlenut oil, wood ash and water mixture, and then laid out to dry in the sun. This process can be repeated up to twelve times to enhance the penetration of the dye. The actual weaving is a painstaking process given that the weft and the warp must be separately dyed and precisely matched.

There are around twenty different geringsing patterns; they are mainly geometric with floral components, such as the example shown here.

The condition of the example here is particularly good. There are no losses or repairs to the body of the textile. There is only some loss to the side fringes. 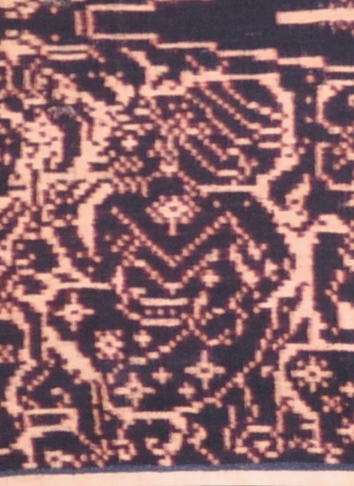 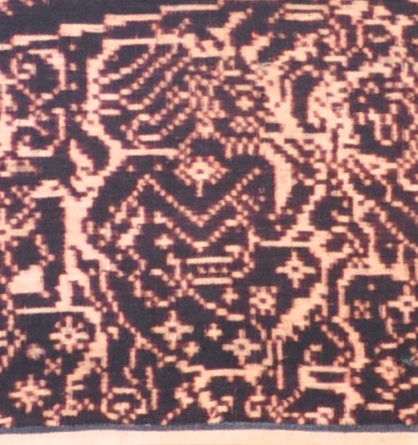 Above: two humanoid wayang figures in the cloth