This male Ere Ibeji figure has a superb patina from age and ritual use. (Ere Ibeji is a combination of Yoruba words: ere ‘sacred image’, ibi ‘born’ and eji ‘two’.) The figure is taller than most ibeji figures and stands with his hands on his hips. He as a startling and stark expression, with wide-open, bulging elliptical eyes. His hollow irises are watchful. His nose is flared and his lips wide. His ears are unusually close to each other towards the back of the head.

Ere Ibeji figures represent a dead infant twin. However, like all such ibeji figures, this example is carved with mature or adult features, such as a strong chest, shoulders, arms, hands and feet. His arms are elongated. His legs are short. Such a contrast in the limbs’ proportions is typical of Yoruba carving. The figure also has a prominent penis and testicles, which again demonstrate maturity.

The three point coiffure rises vertically from the forehead. This high towering crown-like coiffure is found on many female twin figures from the north-western Oyo district. This coiffure is usually reserved for queens. However, all coiffures are typically shared between male and female figures in Yoruba’s carvings.

The Ere Ibeji figure here is in fine condition with rounded contours from handling and use. It is adorned with a coloured-bead necklace, and also a waistband that is made of finely cut black coconut disks. Overall, this is a very fine example.

Yoruba people have the highest dizygotic (non-identical) twinning rate in the world. The births of twins amongst Yoruba women are four times more likely than anywhere else in the world. Unfortunately, the mortality rate of the twins also is very high. Ere Ibeji figures were carved as spiritual representations of the twins who died. These figures were commissioned from village carvers, who were also often highly trained priests (Babalawo). They images were carved as adults, rather than as the deceased infants. It is common in African sculpture that child features in carving are more mature, including elaborate coiffures, scarifications on the face, fully developed breasts (on female figures), pubic hair and prominent genitalia. They were usually placed on a shrine dedicated to

Elegba (a divine messenger deity) in the living area of the house and fed, bathed and dressed regularly. These figures were particularly special to the mother, who kept them close to her and caressed the figures in a loving manner, hence the wear that genuinely old examples exhibit. 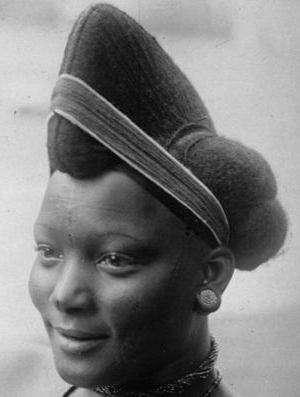