This manuscript chest or sadaik is decorated on all sides and on the lift-up hinged top with gilded molded relief work, a technique known as thayo.

Such a chest was placed in a monastery on a stand away from the harm of mice and water, but usually the chests and the stands became separated. The decorated top is highly unusual. Typically it is the sides only that are decorated with molded lacquer relief; the tops are left plain.

The front panel is decorated with scenes from the Great Departure, when the Buddha chooses to leave life as a prince to follow the life of an ascetic. The popular biography of the Buddha has him leaving his palace at the age of 29 to meet his subjects. He meets the sick, the aged and the suffering despite his father’s efforts to hide such realities from him. He sees an old man and the prince’s charioteer explains to him that all people grow old. The Buddha takes more trips and encounters a diseased man, a decaying corpse, and an ascetic. He becomes depressed and decides to leave the palace and adopt the life of a mendicant.

The top is attached to the base via metal hinges. The interior of the chest is decorated with plain red lacquer.

The chest is in very good condition. There are few losses to the lacquer relief. Parts of the exterior where the gilding might have worn thin have a later coating of powdered bronze paint. The lid has a slight age-related warp although still closes readily. 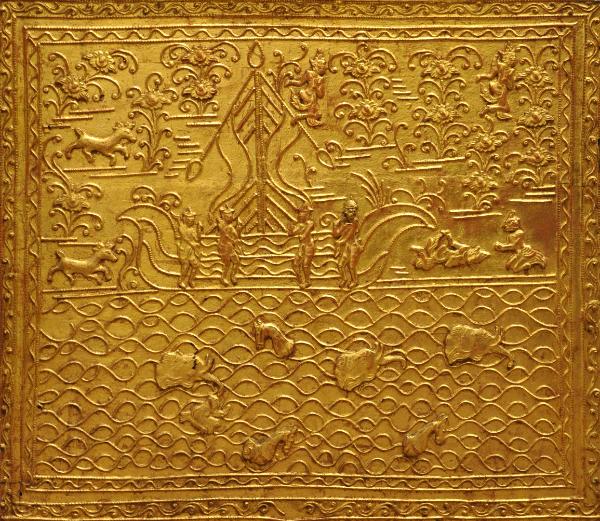