This Indian brass two-handled ewer or pilgrim flask dates to the 17th century. The flattened bulbous body terminates at each end with a curled bud finial or handle. A spout projects from one side. The flask stands on a lozenge-shaped base. An original hinged bell-shaped lid terminates in a knop finial. Each side of the body is cast with a lightly modelled lappet of trefoil form.

Early paintings show such vessels in use. Says Zebrowski (1997), ‘In most of these paintings, the flasks are associated with people of political or spiritual authority, and it is quite possible that this vessel type was thought to be emblematic of high rank.’

The design of this flask appears based on a leather or animal skin prototype. Zebrowski (1997) contains a small chapter devoted to such flasks. ‘This beautiful shape, related to the pilgrim flask of medieval Europe, probably derives from containers made of leather: whole goatskins inflated with water were often depicted in Mughal and Persian paintings.’ He adds that the first example to receive attention was one acquired by the British Museum in 1969. It was considered unique at the time but since then, others have come to light.

Says Piotrovsky and Rogers (2004) in relation to such flasks, ‘Whereas zoomorphic metal vessels in Iran do not appear to have survived the Mongol invasions of the 13th century, in central India they continued to be made up to the 16th century.’ And extraordinarily, The Museum Volkenkunde in Ledien, the Netherlands, has a carved stone image of Brahma that dates to the early 13th century Eastern Indonesia, which has carved into the image a vessel of almost the exact form as here.

The example here has been amended from its original form, although the amendments are likely to have significant age. The waisted neck would have had two pairs of attachment loops from which  brass rings would have hung. A further loop would have been below the spout. Instead, light solder marks can be seen where these loops would have been attached. Also, the underside of the base usually would be concave but it seems that a flat sheet of brass has been added to the base, so that the storage capacity of the vessel has been increased with the base itself now being able to hold liquid. 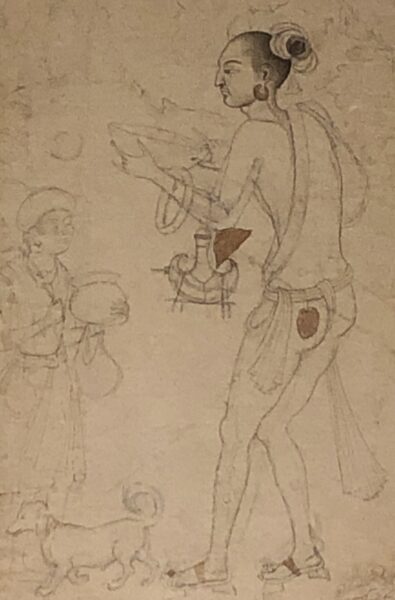 An early 17th century Indian miniature drawing of a sufi or yogi with a pilgrim flask of the form of the example here. Displayed in the Musée National des Arts Asiatiques-Guimet (Guimet National Museum of Asian Arts) in Paris.