This life-sized ancestor figure is of carved wood. It would have been kept in the clan’s ceremonial house. The surface has been carved with totemic motifs and coloured with natural ochres. Cowrie shells have been used for eyes and ear ornaments of shell have been attached to the ears by natural twine string.

The head, body and arms are elongated. The nose is pronounced, the knees have a slight bend, the shoulders are slightly hunched. The feet rest on a small domed plinth.

Much of the decoration on the statue relates to crocodiles. Crocodiles played an important role in the ceremonies and art of the tribes of the Sepik basin. Many tribes conducted initiation or coming-of-age ceremonies in which young men and older boys were scarified with patterns designed to emulate the skin of a image of a crocodile, thereby giving them greater strength. The process would occur in the clan’s spirit house in a ritual of several hours. This figure is carved in a way to emulate such scarring.

The crocodile also plays an important role in creation myths. In the creation legend of the Iatmul, a mythical crocodile who dwelt at the bottom of the primeval sea drew up mud and used it to form an island (Sibeth, 2009, p. 228). It open sits jaws widely this allowing the sun to rise. It then created people and animals. The Iatmul then resulted from the crocodile’s liaison with the first woman. The scarification that boys receive as they are initiated into manhood serves as proof of their linkage to the crocodile ancestor.

The item was collected in the first half of the twentieth century by Francis de Sales McHugh, who was born in Queensland, Australia in 1896. De Sales McHugh worked in New Guinea as a foreman of works for the Queensland Department of Posts and Telegraphs building regional post offices. It was during this time that he collected this item. The figure passed to his daughter who now lives in the UK, and in whose possession it had remained since.

It has clear patina consistent with a late-19th century dating. There are the usual, age-related cracks but these are stable. The statue is able to stand on its own accord on even flooring.

See Newton (1987, p. 26) for a comparable example in the Metropolitan Museum of Art, New York. 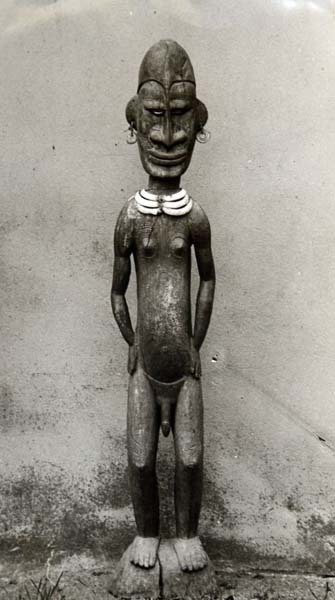 Photographs of the statue taken by the previous owner around 1950. The necklace appears to have been added for the photograph and is no longer present with the statue.

Peltier, P. & F. Morin, Shadows of New Guinea: Art from the Great Island of Oceania in the Barbier-Mueller Collections, Somogy, 2007.

Sibeth, A. (ed.), Being Object. Being Art. Masterpieces from the Collections of the Museum of world Cultures Frankfurt/Main, Museum der Weltkulturen Frankfurt am Main, 2009.