This monumental presentation bowl is one of the largest examples of colonial Indian silver that we have seen – it is massive.  That alone makes it a rare and unusual piece. It is of solid, chased, engraved and repoussed silver. The interior has been gilded (gold plated). It was presented to Rear Admiral Sir John Hext, a senior member of the British colonial administration in India in 1898.

The bowl sits on a wide foot. The bowl itself is very wide and has two prominent handles decorated branches around which snakes are entwined. The foot and the body of the bowl are decorated with numerous Indian deities in a style that became popular among Madras silversmiths and which came to be known as ‘Swami ware’. Each deity in the main frieze around the body of the bowl sits atop an animal mount: there is a horse, a gazelle, a lion, an ox and so on. The mouth widens and is decorated with two bands – one of deity motifs and the other with a band of acanthus leaves.

The bowl sits on a ebonised wooden stand with silver mounts.

A prominent silver plaque is attached to the base and it is engraved with the following dedication:

‘Rear Admiral Sir John Hext RNKCIE – His many friends in the Royal Indian Marine and departments connected therewith as a token of regard & esteem on his retirement after 15 years successful administration of the service 1883-1898’.

The base also has a silver-mounted rounded cavity in which a vellum presentation scroll is enclosed. The scroll has some loss to one side but is hand-written and signed and reads ‘The accompanying [p?] of plate are presented to Admiral Sir John Hext RNKCIE by the undersigned, as a token of their regard and esteem [on his?] retirement after 15 years [successful] administration of the [Royal] Indian Marine Service’.

Hext was born in 1842 in Cornwall and joined the Royal Navy in 1857. He first served overseas in the West Indies. Later he was based in the Cape of Good Hope and West Africa Station. He was involved in the Ashanti War in 1873, and later the Egyptian War in 1882. The following year he was made Director of Marine in the colonial administration of India, a post he held for the next 15 years, the cessation of which was marked by the presentation of this bowl. His time in India included being appointed an honorary aide-de-camp to the viceroy of India, and involvement in the Burma annexation war of 1885–1886.

The bowl is in excellent condition. There are no apparent maker’s marks. The wooden stand on which it sits has been re-polished to freshen up its appearance. This is a rare, monumental, museum-worthy example of colonial Indian silver. 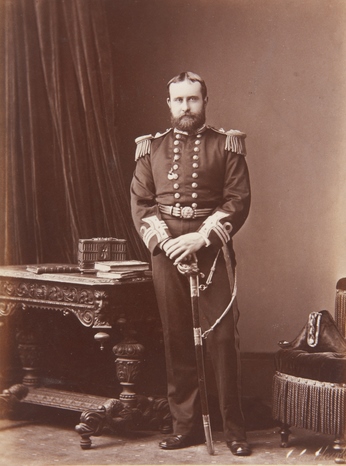