This exceptionally large Tibetan prayer wheel comprises a large ‘wheel’ with a repoussed high-grade silver top and sides and a repoussed copper underside, a heavy silver weight attached to the wheel by the original leather strap, a repoussed silver finial, and a long wooden handle which shows ample signs of use.

The top cover of the wheel has in silver the golden wheel (chakra or ‘khor lo) motif which symbolises the Buddha’s teachings and also serves as an emblem for the ‘wheel of the law’. The wheel and the turning suggested by it are symbolic of spiritual transformation. Buddhas first discourse at the Deer Park at Sarnath in what is today north-eastern India, is known as ‘the first turning of the wheel of truth (dharma) in which he revealed the Four Noble Truths – the truth of suffering, its origin, its cessation, and the truth of the Noble Eightfold Path, which leads to the cessation of suffering. The Noble Eightfold Path is represented on this prayer wheel by the eight spokes of the golden wheel. Their depiction as vajra (thunderbolt) spokes symbolises the indestructible nature of the Noble Eightfold Path.

Tibetans used mantras in many ways. They were used to invoke energies for ritual or magical purposes. Om mani padme hum is the best known example of a Tibetan mantra but there are many others. Mantras only work if learned and uttered ‘properly’ (Rawson, 1991, p. 78.) Reciting mantras can even affect one’s karma. The more often mantras can be recited, the greater their benefit. Mantras might be written on flags so that the mantra is deemed to have been ‘said’ as the wind blows through or past it. Another way to be deemed to have recited a mantra without actually having said it, is to turn a prayer wheel which either has the mantra emblazoned on its outside or written on parchment on the inside, so that each turn of the wheel is equivalent to one recital of the mantra. Consequently, many Tibetans endlessly turned prayer wheels.

This example is unusually large and is not for regular or everyday use. Most probably it was commissioned for use in a noble household or perhaps was commissioned by a wealthy Tibetan for donation to a monastery as an act of merit. It would have been used not when walking, as with small versions, but when sitting, with the wooden handle resting on the floor which would take the weight of the prayer wheel, while the whole lot was then turned.

The example here is in very fine condition and has incontrovertible patina. 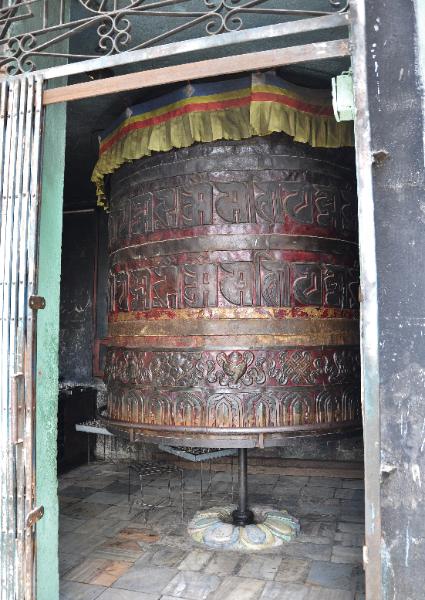 A very large, floor-mounted prayer wheel at a Buddhist complex in the Kathmandu Valley.

Beer, R., The Encyclopedia of Tibetan Symbols and Motifs, Serindia, 2004.