This superb carved wooden figure of a kneeling woman with an infant child on her back and holding a lidded bowl in the form of a cock or chicken has been finely carved all over and decorated with bands of brown and orange-red ochres.

It is referred to by the southern Nigerian Ekiti people as Olumeye (‘One-who-knows-honour’). It depicts a woman who is said to be a messenger of the spirits. Such sculptures were used to hold kola nuts which were offered to visitors, as shrine containers for offerings to anorisa, and to hold palm nuts used in Ifa divination (Rowland, Drewal & Pemberton, 1991, p. 39). It is very similar in form and style to a similar kneeling-woman-and-bowl figure illustrated in Rowland, Drewal & Pemberton which is attributed to a member of the wood-carving Adesina family, most probably the master carver Agbonbiofe who died in 1945.

The image, on a rounded base, is carved from a single piece of light wood. Traditionally, kneeling was a gesture of respect and devotion among the Yoruba.

The figure has an oval face and bulging almond eyes with prominent, fleshy eyelids. The nose is flared; the ears pointed; and the lips full and sensual. Three vertical scarifications are on both cheeks. This type of scarification, termed pele, is regarded by many Yoruba communities in south-western Yorubaland as ‘gems’ on the human face.

The figure has traditional bridal head-dressing: a raised single-crested coiffure with incised triangular motifs. This coiffure is called irun agogo, which is commonly related to marriage.

The torso is erect. Three bracelets are carved on each of her wrists. Geometric carving work is around the female figure’s shoulders and breasts; the breasts are also topped with a diamond pendant. Otherwise, the figure is naked.

Such images of the female represent a manifestation of Yoruba ideals of beauty and the gods’ power to bequeath fertility. The carver has carefully executed the figure’s composition to conform to Yoruba traditions as well as to achieve a great sense of equilibrium.

The figure’s strong arms hold firmly to the bowl. The bowl itself is in the form of a chicken. The bowl is carved with diagonal carved bands.

A baby figure is carved clinging to the female figure’s back.

Overall, this bowl group conveys a sense of tranquillity through the facial expression of the primordial mother. She is youthful, and yet strong and maternal.

It has an excellent brown patina with contours softened from age and handling. There are no significant or obvious chips, splits or restorations; just a tiny nick to the top of the headdress but this is lost in the overall profusion. 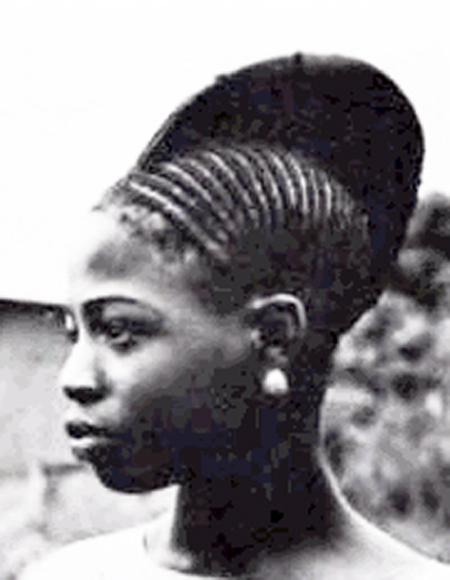 Lawal, B., The Gelede Spectacle: Art, Gender, and Social Harmony in an African Culture, University of Washington Press, 1996.

Walker, R. A., Olowe of Ise: A Yoruba Sculptor to Kings, National Museum of African Art, 1998.