This striking and impressive earthenware roof ridge tile is in the form of a crocodile-headed man seated, open-legged, upon a bulbous fish. It has been decorated with white and black ochre bands. It was made to adorn the top of a clan house.

The figure, with elongated arms and legs sits atop the fish, with his legs widely splayed and his arms resting on his thighs. His head has been subsumed into the body of a long crocodile, the pointy tail of which arches down over his back to meet the fish.

Crocodiles played an important role in the ceremonies and art of the tribes of the Sepik basin. Many tribes conducted initiation or coming-of-age ceremonies in which young men were scarified with patterns designed to emulate the skin of a image of a crocodile.

The item was collected in the first half of the twentieth century by Francis de Sales McHugh, who was born in Queensland, Australia in 1896, and who worked in New Guinea as a foreman of works for the Queensland Department of Posts and Telegraphs building regional post offices. It was during this time that he collected this item. The tile passed to his daughter who now lives in the UK, and in whose possession it had remained since.

The tile has some chipping to the bottom rear and some losses to the feet of the humanoid figure, but other than that, it is intact and free of chips and cracks. The walls are of thick clay and the tile is heavy for its size. Overall, the form is highly unusual, the tile has clear provenance and is very decorative. 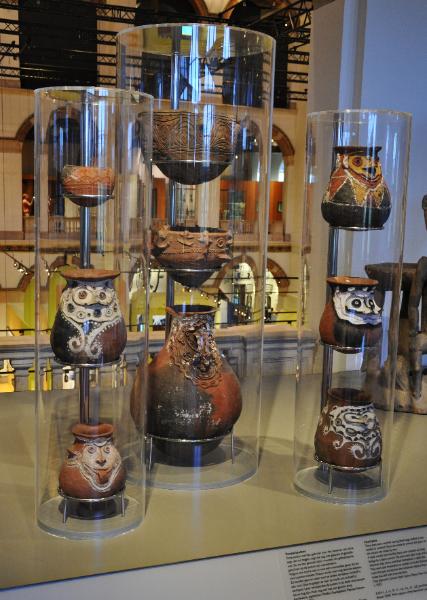 A collection of food pots made of terracotta with pigment in the Tropenmuseum, Amsterdam. The pots are dated to around 1935 and attributed to the central Sepik region of New Guinea.

Peltier, P. & F. Morin, Shadows of New Guinea: Art from the Great Island of Oceania in the Barbier-Mueller Collections, Somogy, 2007.