The cult of Shango, the Yoruba deity associated with thunder, is an important part of traditional Yoruba spiritual tradition.

This large goat-leather bag known as a laba was used as a shoulder bag to hold the Shango priest’s staff (ose)  and the calabash or gourd (sere) which contained dried seeds which the priest would shake to call the Shango deity to prayer. The items would be stored in the bag in the Shango shrine when not in use, with the bag being suspended from the eaves of the shrine.

It is of hand-sewn goat-leather, untanned hide and velvet with extensive embroidery using fine, dyed strips of leather. The dyes used are red (from bulrush millet) and yellow (from ginger and lime juice). Red is a colour that signifies danger and the destructive rage of Shango in his role as the thunderstorm deity.

It is in satchel form in that it opens out and has interior pockets. The lower end is decorated with a dramatic tasselled fringe. The front flap is decorated with four panels each with a stylised humanoid figure intended to represent a Shango devotee holding a staff and a rattle. The underlying section is sewn on either side with a rope-twist motif commonly seen in Yoruba and Benin art.

The bag was found in the attic of a house in northern England where it is believed to have been stored undisturbed since at least the 1930s.  The style, provenance and patina of this bag suggest a dating of circa 1850. Later Shango shrine bags often were covered in imported glass trade beads.

Laba bags were made exclusively by leather workers in the ancient city of Oyo in Western Nigeria, working at the behest of a Magba or chief Shango priest (Pole, 1999, p. 27; Beier, 1957).

Shango was the fourth king of the ancient Oyo Empire, according to oral tradition (the city of Oyo was the old capital). He defeated the rivalrous Dahomey Kingdom. His army was famed for its skilful cavalry on the battlefield. However, Shango was also renowned for his unpredictable use of power, and his obsession with magic which often involved invoking thunder. He reigned for only seven years. His capital city Oyo-Ile and the royal family were destroyed by severe thunderstorms, apparently brought by his misuse of magical powers! He was devastated by the destruction of his family and his consequent humiliation by his chiefs. He left Oyo and committed suicide in Koso. However, thunderstorms continued to strike the Oyo Empire after his death. His chiefs built shrines and deified Shango to appease the thunderstorms. The shrines were richly adorned with carved wooden effigies.

A festival for Shango was held once a year. During the Shango festival, devotees would dance in the streets to the thunderous rhythms of bata drums. Devotees would dance with dance wands that were waved vigorously with violent and threatening gestures to imitate the dangerous powers of Shango: unpredictable, violent, and creative and destructive – all at the same time. The Shango ritual would reach a climax when one of the devotees became possessed by Shango himself.

The Yoruba is one of the largest tribes in West Africa. There are 30 million Yoruba people in West Africa, predominantly in Nigeria. There is now an important Yoruba diaspora worldwide. 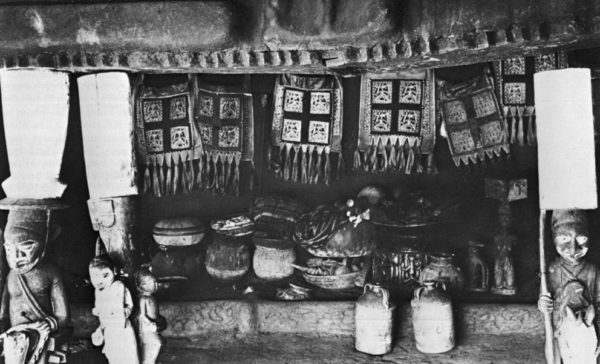 (Above) This early photograph of a Shango shrine dates to 1910, Agbeni, Ibadan, Nigeria. Similar bags are shown suspended at the rear of the shrine. This photograph has been reproduced variously, including in Drewel & Pemberton (1989, p. 156). 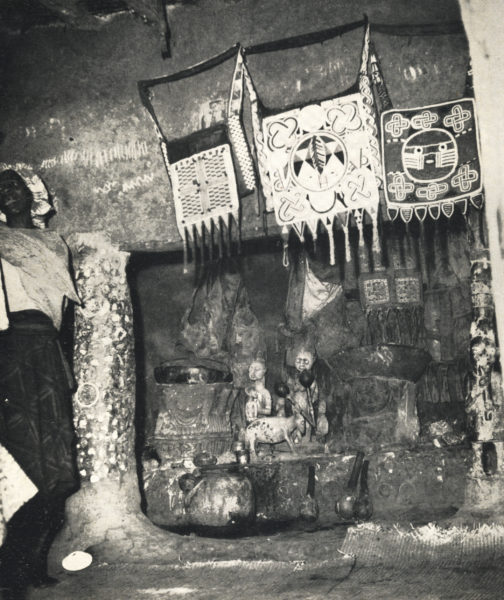 (Above) This  photograph, published in Beier (1957) shows a Shanggo shrine in Ilobu, Western Nigeria. Newer, beaded laba bags adorn the front of the shrine, and the older type similar to the example here are suspended at the rear of the shrine.

The laba bag here is in fine condition. There are weaknesses to the handle, and a break that has been mended, and old repairs to the reverse of the handle, consistent with age and use. The bag has a rich patina and very obvious age.