This fine box of solid ebony (Diospyros Celebica) is carved extravagantly on all sides and on the hinged lid with bold flower and leaf designs. It is a fine example of colonial carved ebony woodwork of a type associated with the southern Sri Lankan port town of Galle. It has an excellent patina and a distinctive metallic lustre associated with the best quality ebony. The base is of light wood.

Boxes such as this example were used in Sri Lanka by ladies to store jewellery and hair ornaments. Later, they were commissioned for the colonial market as well.

Carved ebony furniture has been recorded in English collections from as early as the mid-eighteenth century. As Jaffer (2001) points out, this type of furniture was thought to be Elizabethan but is now recognised as being either of Indo-Portuguese, Batavian, Sri Lankan or Coromandel Coast origin.

Distinguishing between items of carved ebony furniture made in Sri Lanka, Batavia or the Coromandel Coast is difficult because Dutch administrators and merchants are likely to have taken as personal effects furniture produced in the Coromandel Coast region to other Dutch settlements in Sri Lanka and Batavia where it was extensively copied. Similar quality craftsmanship, partly available from indentured Tamil craftsmen taken by the VOC to all three destinations, was available in all three places as was ebony wood (Jaffer, 2001). However, this box does have flower motifs that are definitely of Sri Lankan origin.

A pale brass lock and other pale brass mounts are used inside and these are held in place by screws with off-centre drives in their heads, which seem to date from 1830 onwards.

The box is in original, excellent condition. The hinged lid fits evenly and there are no signs of warping. The box is fitted with a brass lock but the original key no longer is present. 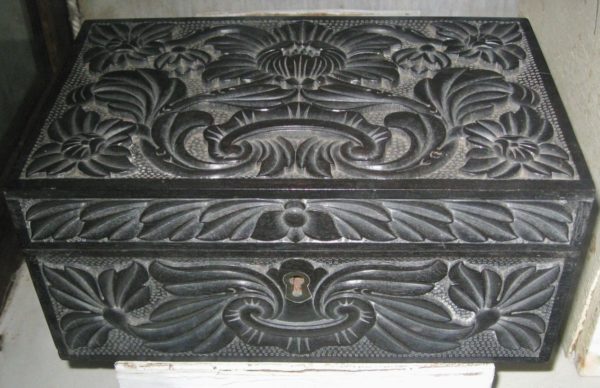 A carved ebony box similarly carved in high relief displayed in the National Museum of Sri Lanka in Colombo.

Jaffer, A., Furniture from British India and Ceylon: A Catalogue of the Collections in the Victoria and Albert Museum and the Peabody Essex Museum, Timeless Books, 2001.