This large and impressive solid silver two-handled trophy is by the sought-after Calcutta maker Dass & Dutt. It is of conventional trophy form with a lid. The foot, body and lid are all chased with scenes of a boy’s rugby camp – boys are seen playing the game with pitched tents in the background. It is an evocative example of social history.

The comma-shaped handles are formed as segmented bamboo canes. The domed lid has a well cast finial of a boy running with a rugby ball.

An armorial shield on one side is engraved with the words ‘Calcutta Memento Cup’. An applied plaque on the other shows the insignia for the 33rd (or First Yorkshire West Riding) Regiment, also known as the Duke of Wellington’s Regiment (active July 1702 to 6 June 2006).

The regiment was dispatched to Calcutta in 1796 to be under the command of Colonel Arthur Wellesley, as part of a British East India Company army. In 1799, it took part in the Fourth Anglo-Mysore War. It played a decisive role in the Battle of Seringapatam against Tipu Sultan’s forces. In 1857 the regiment had an active role in operations in conjunction with the Indian Mutiny. (The regiment was amalgamated with the Prince of Wales’ Own Regiment of Yorkshire and The Green Howards to form the Yorkshire Regiment in June 2006.)

The regiment had a long and noteworthy association with rugby, producing many international players. This cup suggests that they had a role in bringing the sport to India.

Rugby union was introduced to India by the British. The earliest known game of organised rugby in India was a series of scratch matches played in Calcutta and Madras during the visit of HMS Galatea in 1871. Other matches were played in Calcutta the following year when the Calcutta Football Club seems to have been established. By 1873, officers were appointed and the Club colours were chosen. But the game never really took off with the same gusto as did cricket, partly because the British preferred to play the game among themselves rather than with the participation of the local population.

The Calcutta Cup was established and the cup itself was commissioned from Indian silversmiths. That cup is now held at the Rugby Football Union’s headquarters at Twickenham, UK. It is of impressive size and clearly of Kashmiri origins.

Today, the Calcutta Cup is a rugby union trophy awarded to the winner of the annual Six Nations Championship match between England and Scotland played in the UK.

The Calcutta Memento Cup was a fixture organised by and perhaps for the regiment.

The cup is in fine condition being without dents or splits. The chasing does show wear from polishing however in keeping with all such regimental silver which was habitually kept well cleaned. Overall, it an unusually large example of colonial Indian silver. The foot rim is stamped with ‘Calcutta / Bhowanipore / Calcutta / Dass & Dutt.’ 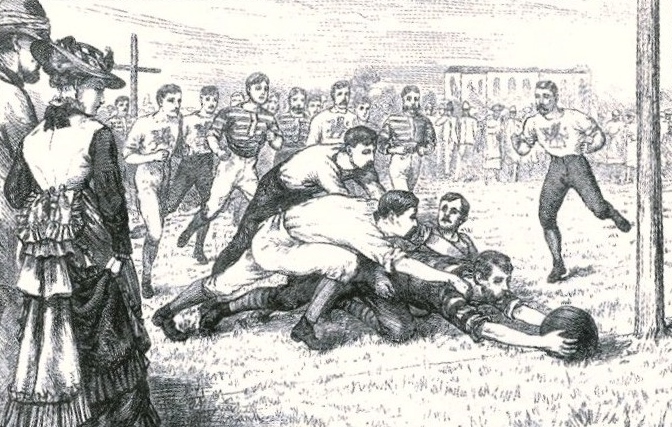 An engraving of Europeans playing rugby in Calcutta in the 1870s.