This thin, pencil-like ear ornament known as a sochi is made from twisted gold and pearled wire, gold sheet, a single pearl or mother-of-pearl bead, turquoise pieces, and a long turquoise-coloured glass drop.

Such pendants were worn from the left ear as a badge of office by Tibetan government ministers and officials.

The gilded hoop at the top of the pendant fitted through the pierced ear but the weight of the pendant usually was supported by a thin strip of silk textile that was attached to the hoop and which fitted over the ear.

The example here is for a government official, but generally all Tibetans wore at least one earring of one type or another – Borel relates a Tibetan superstition that anyone wears no earring is likely to be reincarnated as a donkey.

The ear pendant is in a fine condition albeit, the pointy tip of the turquoise-coloured glass drop has been ground down undoubtedly to smooth out some loss, but this looks to have been done a long time ago. 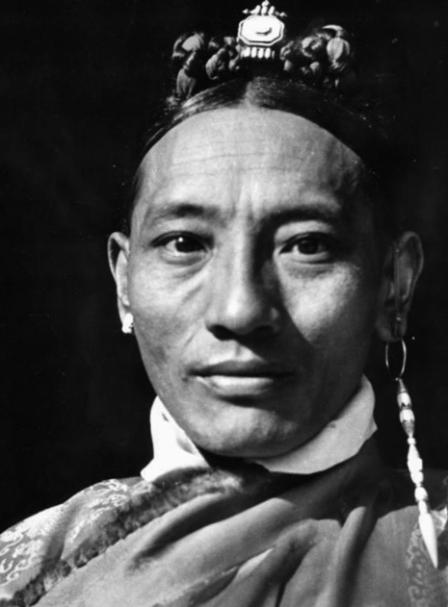 Scroll down to see more images

Clarke, J., Jewellery of Tibet and the Himalayas, V&A Publications, 2004.

Reynolds, V., Tibet: A Lost World: The Newark Museum Collection of Tibetan Art and Ethnology, The American Federation of Arts, 1978.