This fine lip plate or plug has been carved from a single piece of light, blond wood. It is of semi-oval form with a curved groove all around the sides which allowed the plate to be kept in place, with the pierced lip stretching right around the plate and in the groove. A convex dimple is in the centre of either side.

According to Ginzberg (2000, p. 249) ‘of all lip and ear plugs used in Africa, this wood plate, worn in their vastly stretched lower lips by Kichepo women in Sudan, resulted in the most shocking distortion.’

The size of a Surma or Kichepo girl’s lip plate suggested the number of cattle her family required for her as a bride price. Young women had their lips pierced and fitted with a plate. These were worn in the presence of men and only taken out when the woman was eating or sleeping. When the plate was not being worn, the stretched lip would hand as a loop, distended from the mouth.

The plate is in fine condition with a smooth, worn feel. A corner on one side is shortened. Perhaps a segment broke away during use and so was reshaped. Or perhaps it was made this way to accommodate the shape of a specific lip. In any event, the corner is now as smooth as the rest of the groove. 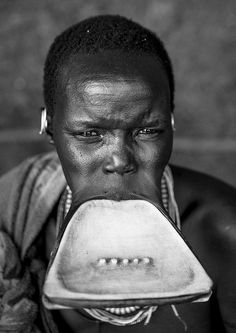 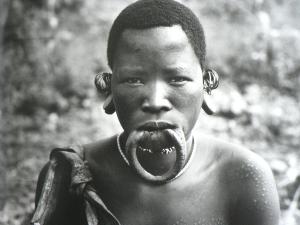 With the plug in (left) and with it removed (right)