These two highly unusual attendant figures possibly were part of an entrance to a shrine – to stand on either side as guardian figures. Possibly, they were also intended to decorate a religious charriot. Each stands erect but with arms in dynamic poses. Each is of darkened wood but with ample grey-white tilaka marks to their foreheads, upper and forearms to suggest their ascetic qualities. (Traditionally, these marks are made with ash from sacred fires.) Both wear long Hindu rosaries down their chests. One is carved to suggest a long rosary of striated brass beads, the other is carved to clearly suggest rudraksha beads.

Both also have unusual, tall headdresses which are carved with floral motifs; large, deep-set, almond-shaped eyes that are wide if not startled; and full lips painted bright red. One holds a short sword. The other was intended to hold something similar.

There are several aspects to these statues that mark them out as very unusual. First, they carry tilaka marks for both Shaivite adherents and Vaishnavite adherents. There has been a small movement in South India, including Madras, whereby practitioners have sought to unify the two main strands of Hinduism and so adhere to both Shiva and Vishnu. The images here appear to have their origins in this tradition.

Another curious feature of these images is their hairstyles. The figures have been carved with luxuriant, long hairstyles which suggest colonial European influence – indeed the powdered wigs fashionable among European men in the 18th century. It is the hairstyling on these images which suggests their dating. The hair is finely carved into scrolling neat strands. This seems to be modelled on the powdered wigs that would have been worn by British officers and other senior colonial figures in Madras in the 18th century.

Finally, the tall headdresses atop the wigs are very unusual. But again, these seem to suggest British influence. Officers of the Madras Infantry-European Regiment for example wore such hats.

The rudraksha seed is the stone of the fruit of the utrasam tree and is believed to be sacred to Shiva. The name ‘rudraksha’ means ‘eye of Rudra’, an ancient name for Shiva. The seeds are made into beads and worn as rosaries, necklaces and bracelets by Shaivite devotees and priests. Many devotees never remove such items, considering them among their most sacred possessions.

The two figures here are in a fine, stable condition. There are expected minor chips and so on but no significant losses and no repairs. There are shrinkage-related gaps where the arms join the bodies but the joins remain robust. Overall, these are striking, sculptural and very unusual. We know of no other similar images. 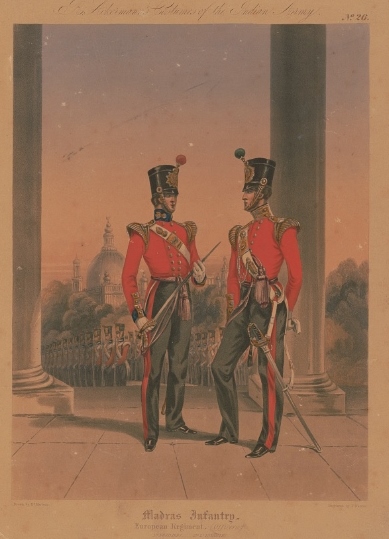 Above: Officers of the Madras Infantry wearing tall hats similar to those seen in the statues here. The engraving is form the early 19th century by which time the fashion for wearing extravagant powdered wigs had ceased.