This is the third in a series of blog posts devoted to our favourite-ever items that we have discovered.

Examples of gilded, carved wooden images of the Buddhas two main disciples are not rare but this pair was the best we have encountered. We found them in England (which remains the best place to find Burmese antiques with old, genuine provenance on account of its colonial past), and they have the finest, most sympathetically carved faces we have seen on such a pair. They are now in a private Canadian collection. 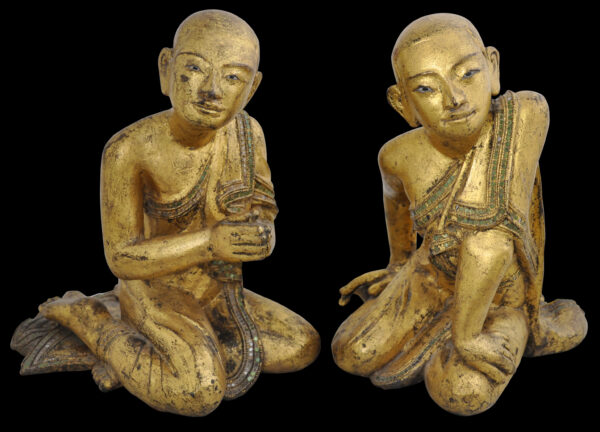 This pair of the Buddha’s two chief disciples, Sariputta and Moggallana, from 19th century Burma (both with heights of 32cm), is of gilded and lacquered wood with mirrored glass inserts. The faces of each are among the best sculptured faces we have seen on such images of the two disciples. Their gazes are both inquiring and gentle. The faces and heads are particularly well modelled and clearly are Burmese. The eyes are naturalistically rendered which has been achieved with expert carving and the use of inserts of either wax or mother-of-pearl.

Sariputta sits in a position of listening with his arms resting on his upper legs. Moggallana sits with his hands pressed together in adulation. Both sit in the way of a Buddhist worshipper with their feet pointing behind them and away from the focus of veneration. Their feet rest over the ends of their robes which trail behind them.

The robes of each are highlighted with bands of moulded lacquer relief work, known as thayo work. The lacquer thayo on the robes and heads of each disciple is inset with glass roundels backed with green foil (known as hman-zi- shwei-cha).

Images of the Sariputta and Moggallana often are found in Burmese artwork. Carved wooden and lacquered images were used in temples and monasteries where they were placed before images of the Buddha as part of a shrine (hpaya khan).

The pair was acquired in the UK and almost certainly have been in the UK since colonial times. This accounts for their fine condition despite their obvious age.

See the Burmese items we currently have in stock.