This is the second in a series of blog posts devoted to our favourite-ever items that we have discovered.

The necklace here – of enamelled gold, with a massive emerald, coral and rubies – is our favourite ever jewellery discovery. It was in a UK jewellery collection for many years and had always been thought of as Indian and probably dating to the 19th century. In fact, we identified it as North African – Moroccan in fact – and dating to the late 17th or early 18th century. It is one of the rarest pieces of jewellery we have had. There are only a handful of intact examples of such necklaces that survive and this example is in the most original state among them. It is a real museum piece and is now in a New York collection. 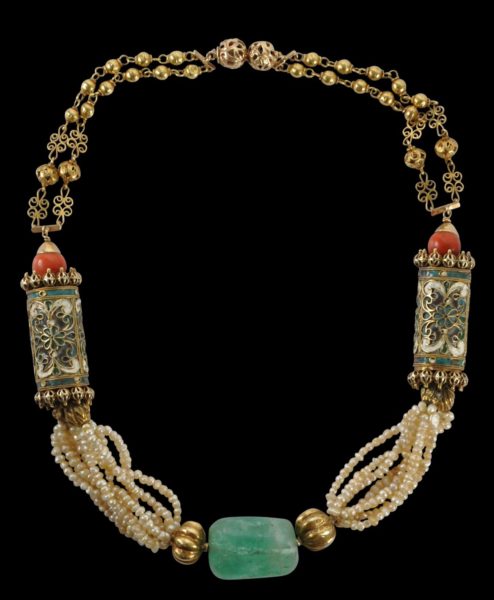 This is a very rare example of a northern Moroccan gold necklace that dates to the early 18th century and possibly to the late 17th century, and most probably is from Tetouan. Only a handful – perhaps three examples – are known to still exist and these other examples tend to have been amended or reconstituted in part with the addition of later and foreign elements. The example here almost certainly is in its original condition. It would have been commissioned by an aristocratic or noble family if not a member of the royal household itself. Of definite Moroccan origin, it shows distinct Islamic Spanish Andalusian influence.

The cloisonne enamelled cylinders are known as qannuta and are modelled on elements in necklaces from the Nasrid period (13th-15th century) in Muslim Spain (Goldenberg, 2014, p. 12.) New York’s Metropolitan Museum of Art has a well-known example of a Nasrid necklace with related cylindrical beads. There are other examples in other museums and these examples also date to around the 13th-15th centuries.

The emerald and lower beads are strung with the original twisted drawn silver wires. This is a particularly early (and authenticating) way of stringing earlier and more costly Moroccan necklaces.

The gold chain has an early clasp mechanism with two pierced gold spheres. These appear to have what is likely to be a maker’s mark stamped onto them. It is difficult to ascertain what the marks are but they appear to be Hebrew lettering. This is consistent with the necklace having been made in Tetouan where most of the goldsmiths were of local Sephardic Jewish origin. A significant wave of Jewish immigration into Morocco came from Spain in the late 15th century from where there were expelled. They joined the Jewish population in Morocco that had already emigrated from Andalusia. Tetouan was one of the more popular places for the Jewish migrants to settle. Trade and crafts were among the economic activities open to Jews, with silver and goldsmithing  among them. The Jewish goldsmiths supplied fine jewellery to local aristocratic clients but also to their own community which acculturated to a degree with the local Arab and Berber populations. All groups required elaborate and costly jewellery, particularly for weddings.

The version here, with a large, central rough-cut emerald at its centre is known as a m’dejja or khnag.

One related example, in the Musee de l’Institut du Monde Arabe in Paris, is illustrated in Goldenberg (2014, p. 12) and in Rabate & Goldenberg (1999, p. 72). The Museum’s example is possibly later than ours but also is incomplete. It has various added elements (beads particularly) which possibly are as late as the early 20th century and which are not from Tetouan. The chain and clasp is also missing and have been replaced by a much later cloth ribbon.

Phillips (2004, p. 562) illustrates a pair of similar qannuta (then) in the Musee National des Arts d’Afrique et d’Oceanie, Paris, which are given a tentative dating of 17th century and attributed to Algeria. Also see a related ‘Imperial’ necklace in London’s Victoria & Albert Museum, which the Museum dates to the 18th century and which it acquired in 1902.

Ours is the only example we know of with such a massive emerald.

Goldenberg, A., Art and the Jews of Morocco, Somogy Editions, 2014. 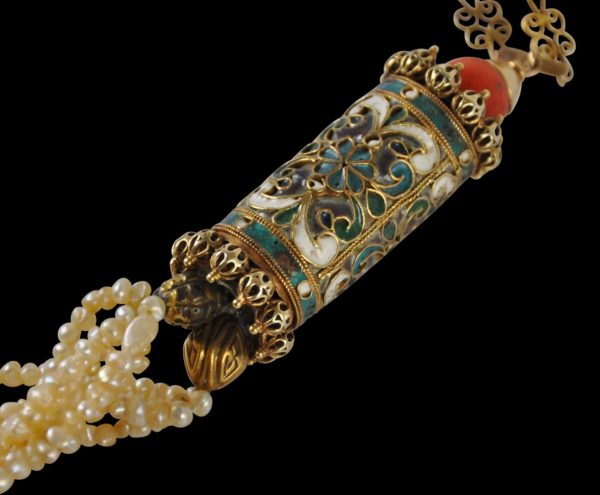 See the Dutch Colonial & related items we currently have in stock.