The Snake Charmers of Marrakech 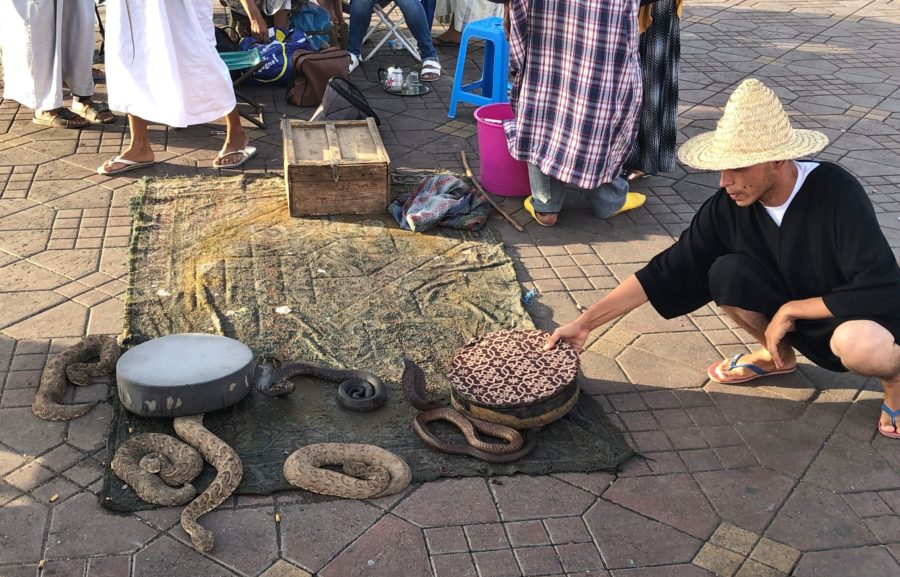 Marrakech in Morocco has long been at the confluence of trade between the Mediterranean and the Sahara.

The city is vibrant and dynamic. It reeks of trade. Its famous, massive square, the Jemaa El-Fna, is the heart of the medina and may have been in its current, approximate form for as long as a thousand years. Long has it been home to public entertainers: acrobats, singers, storytellers, astrologers, herbalists and snake charmers.

It is believed that some 400 such performers still earn a living from their activities in the square. Traditionally, each plied their trade via formulaic shows (halqa) but today these are growing more brief as the performances become less ritualistic and more commercial. Western tourist visitors to the city sometimes feel that the performers are somehow not ‘real’ and that they are there purely for the tourists. But this is not so. The square now attracts many such tourists, but each night, they are still swamped by Moroccans eager to watch the performances.

The other important thing to remember is that the Jemaa El-Fna has been attracting tourists for hundreds of years – from across Africa. Travellers and traders have flocked to the sub-Saharan city drawn by its markets (souqs), its religious schools (madrassas) and so on. (Some early postcards are included below but of course ‘tourism’ to Marrakech has been an important local revenue earner pre-dating photography.) The performers are not some recent creation for the benefit of westerners but are carrying on a tradition that reaches back hundreds of years. Membership to each performing group is tightly controlled via guild-like societies, and traditionally, transmission of the craft from one generation to the next is secretive and ritualistic.

The snake charmers, for example, belong to the Aissaouas (Aissawa) brotherhood, a mystical-religious Sunni Sufi order founded in Meknes (near Fes in Morocco) by Mohamed ben Aissa (1465-1526). The order is known for its spiritual music, which typically comprises religious psalms set to music played using a ghaita, a wind instrument similar to an oboe. The instrument gives the musicians the appearance of a stereotyped snake charmer but in fact, the ghaita is more associated with the order’s dervish trances than with snake charming. (The order’s main religious headquarters, akin to a monastery or zaouia is still in Meknes today.) Tourists pose with the snakes for a fee but probably they always have; only the technology is different. And it remains the case that the snake charmers have important, historical underpinnings and religious associations. If anything, the demand for their services has increased in time with their trade undoubtedly experiencing an Instagram-led renaissance.

For our range of North African & Middle Eastern antiques.