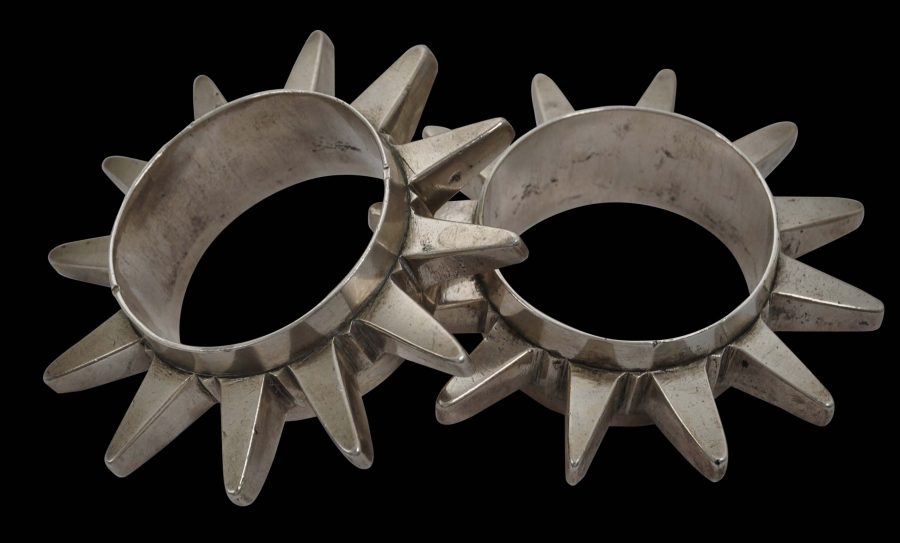 We hosted the British-Moroccan Society in the gallery last evening. Members, who do a fantastic job at promoting ties between the UK and Morocco, were treated to a superb presentation by Sarah Corbett on regional variations in the traditional jewellery worn by Moroccan women, and a presentation by Michael Backman on Haj-driven, cross-cultural exchange across the Islamic world with particular reference to Islamic Southeast Asia.

Sarah demonstrated the wide variation in jewellery and costume often across only small geographic areas in Morocco. She talked about how jewellery was worn in accordance with a woman’s status as a wife, mother and so on, and pointed out that traditionally-attired Moroccan women could ‘read’ each other’s jewellery and immediately assess each other’s marital status, number of children, place of birth, social standing, and so on. Some of the jewellery showed local Jewish influence too, and Sarah pointed out that in Morocco that Jews and Moslems traditionally had lived side by side with much respect for each others traditions.

Michael talked about the role of the Haj in promoting Moslems as among the world’s great travellers and thus traders and explorers. The Haj promoted much mixing among the Islamic cultures of the world and provided a ready transmission mechanism for motifs and styles in art and material culture. He made the point that Indonesia has been the largest single source of pilgrims to Mecca since the 19th century and that today, because of population-related quotas, the Haj now is very much a South Asian and Southeast Asian phenomenon with the overwhelming majority of pilgrims to Mecca now coming from these areas.

Shown here are pictures from the evening, interspersed with items from Morocco that we have available currently, drawn from our selection of North African & Maghreb antiques.