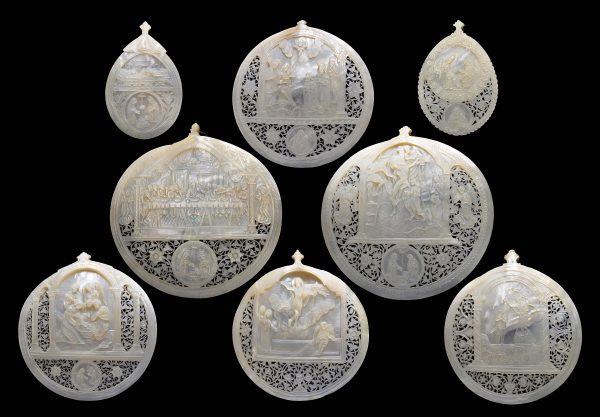 We are delighted to announce that this fine set of eight pilgrimage mother-of-pearl shells, which was acquired from us by the Musée du quai Branly in Paris, one of the world’s leading museums for non-western art and material culture, has just gone on permanent display in the Museum.

The set is particularly well carved and in excellent condition.

Shells such as these were sold to Christian pilgrims in Jerusalem and Bethlehem, where they were carved in relief and pierced by hand by local Palestinian craftsmen. In this way, the shells found their way to Europe and elsewhere during the nineteenth century. Orthodox pilgrims from Russia also carried significant numbers back to Russia and so today the Hermitage Museum in St Petersburg has an important collection of such shells and other items manufactured in Palestine from the shells. Many of these were transferred from the Winter Palace and the domestic chapels of other Imperials palaces – they seem to have been presented to the royal family by pilgrims returning from the Holy Land. The Vatican Museum also holds related mother-of-pearl Christian items from the same source. The shells themselves were sourced mostly from the Red Sea. 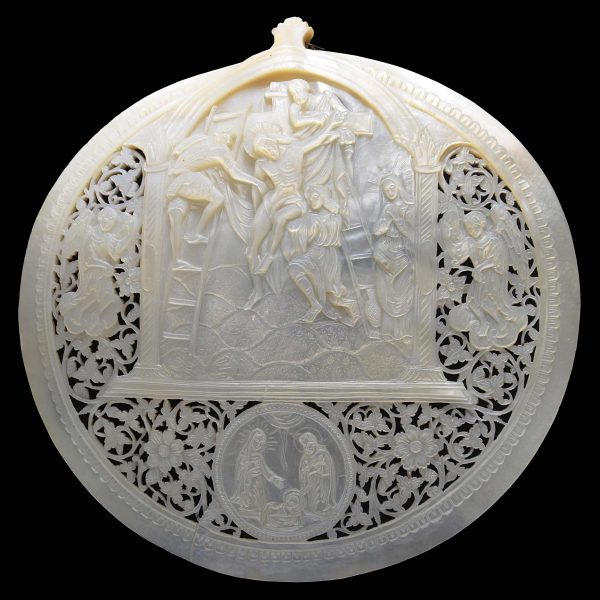 The Musée du quai Branly also purchased from us the enamelled Armenian silver cross below. The cross is of silver, pearled silver wire filigree, and blue, turquoise, green and yellow champleve enamel. It would have adorned a holy altar table in a wealthy Armenian home and dates to the 18th or early 19th centuries.

Both the cross and the mother-of-pearl shells came from old English collections.

Selling to both private collectors and to museums is an important part of what we do.